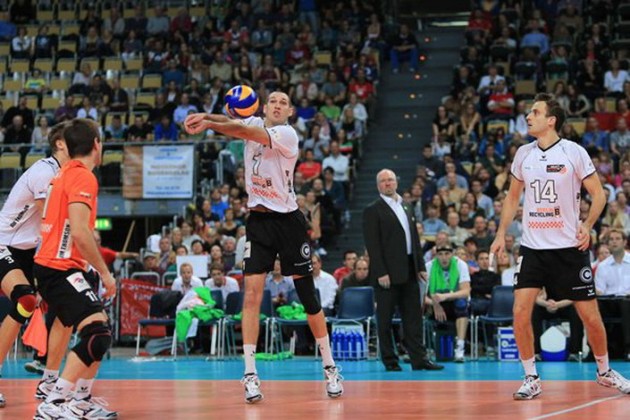 After a good hour of play and two completed sets guests from Berlin looks to be the winner. The first two rounds of the German champions dominated thanks to good spreads, strong block work and a variable attacking game. But after the clear 2-0 set lead the BR volleys concentration slowed somewhat, the hosts brought a change to the passing position – Patrick Steuerwald came for Brano Skladany – new ideas and fresh air came into the game. Supported by the noisy fans Unterhaching succeeded to equalize the 2-2 sets, so that like in the last play-off final needed to play tie-break.

The team from capital city celebrated an impressive comeback. The team captained by Scott Touzinsky was back fully on top of things and pulled the tempo at the crucial moment again. In this way could the BR Volleys settle at the change of the lead with 8:5 and then defend sovereign until 15:10 win the match. “Mental we were actually at an advantage in this situation, but we had left too much power in the race to catch up,” analyzed Hachings captain Christian Dunnes the game-winning rally.

Berlin Recycling Volleys Coach Mark Lebedew was satisfied after the game with the idea of his team: “We won in a week against Friedrichshafen and Haching. That should give us the confidence for the important game against Ceske Budejovice“.

ITA M: Sunday REST FOR THE CHAMPIONS OF ITALY