Panathinaikos A.O. fought back to Olympiacos O.S. Piraeus with a notice... 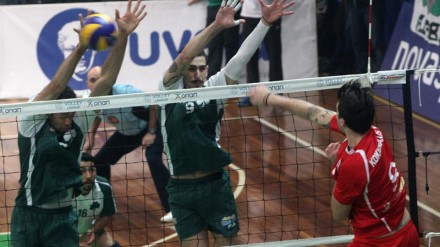 Panathinaikos responded to its ’eternal’ rival, who issued a statement on a bad behaviour of Panathinaikos’ fans on the derby played on Monday.

Here are some details of PAO’s announcement:

„…Normally, this notice contains the myths and fantasies because everybody heard the statements of the coach and the top player of Olympiacos. Both expressed their admiration for the atmosphere. Just the administration of the club later spoke on ’a climate of terror and intimidation’!“

„The coach Kazazis spoke of a fantastic atmosphere, said it was very nice and that hopefully the stands will always be so full. It was very clear that there was no way he said all this ironically, as supposedly explained later. The funnier is the ’clarification’ that his statement was made initially under the threats of 250 fans. Unfortunately for the authors of Olympiacos’ note, the video clearly shows that the statements were made in an empty hall, without even a single fan around!

„…We were surprised, however, how Olympiacos escaped from a statement of Diachkov… Thus, we will inform them that its leading player, not only did not report the non-existent facts that they themselves invented, but spoke with admiration about the fans of Panathinaikos, marked them as their seventh player.“

„During the match, the only ones who were in front of the stands were the people of Panathinaikos to ensure that no one harm the opponent. These saw everyone on TV and the administration of Olympiacos should be grateful. To be self-critical, it really displeases us that, for a few seconds, a bad slogan was shouted against rival players. It was wrong and we will continue our efforts that such slogans will not be heard at our court again.“

„PS: In the photo we see 250 angry Panathinaikos fans who threaten Mr. Kazazis and Mr. Andreopoulos (Panatinaikos coach) and holding by force Diackov before a reporter hit him with a microphone!“