Italy: Mikko Esko – “In Piacenza with the spirit we had against Monza”

Casa Modena: The players are enjoying a day rest following its 3-1 cup quarter-final triumph over Monza. Next is a road game against Piacenza, which managed to beat Macerata in the last round. 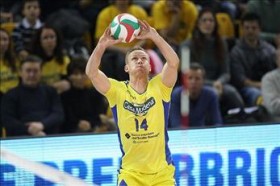 “We had to win it, it’s great to play those games, but the defeat in the league in Monza had put some pressure on us – said setter Mikko Esko about the cup quarter-final.

“We were extremely focused and keen to make it to Rome. Now I can admit that my father had already booked his ticket to watch the Final Four in Rome before we even played the game: If we’d lost, I don’t know how I would have told him. On Sunday, we’re up against Piacenza, a team that improved a lot since we last met them. They have just beaten Macerata and are angry for points. We’ll need the same attitude and focus that we had against Monza” adds .

EXCLUSIVE: Kaziyski – “Volleyball is dying in...