A new face and a confirmation. Take off the market Chieri Volley Club Torino. The white and blue team shakes hands with Monica Ravetta Sorokaite and Indre Sorokaite. 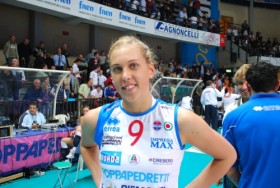 The first side, the other Spiker ricevitrice now a flag of Piedmont team as it prepares to hold its fourth consecutive season in partnership chaired by Maurizio Magnabosco. The diesse thus brings with Pastor Mark Francois Salvagni two other players after the purchase of blue Martina Guiggi.

Indre Sorokaite began the second part of the meeting with the National coach Barbolini Alassio, while Monica Ravetta wore the jersey of Italy between 2009 and 2010.

The opposite Pavia, born in 1985, comes from the Russian league since last season he played for the jersey of Zarechie Odinstovo after being highlighted in the ranks of Florens Castellana Grotte in 2010-2011 competing in a championship tournament of absolute value, by earthing well-387 balls.

Indre Sorokaite, Spiker born in 1988, it is almost white and blue flag of the club, boasting 83 caps between series A1 and A2 with 1220 points signed. In the next season that Francois Salvagni finds her in 2004, when he was sixteen, made her debut in Serie A with the shirt of Castelfidardo. Before moving to Bergamo where he remained for three seasons between 2006 and 2009. Then the landing hill in the team writing the pages of the most exciting recent history of this club. From promotion to top flight of the 2010-2011 season the convening of the blue just conquered.

From Urbino – one of the many pieces coming out – then he should get to Piedmont libero Imma Sirressi.

ITA M: Next against Modena