ITA M: MACERATA dominates the scene to down ACH Volley in straight sets 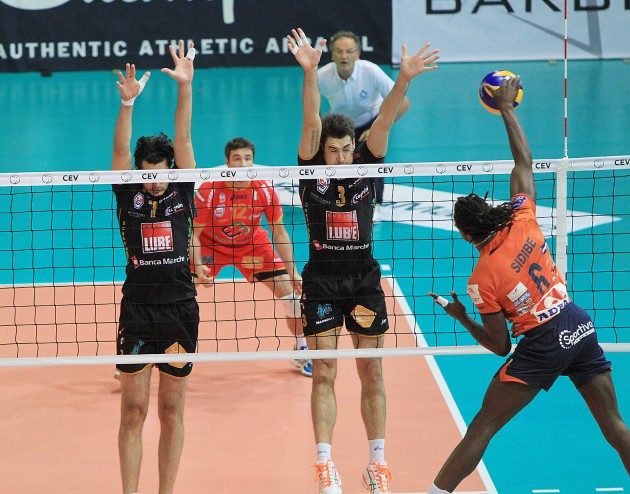 The Italians totally dominated the match with the only exception being the first set where the score remained very close up to the end. With the addition of Andrej Flajs, ACH Volley got back from 22:24 to 24 all before the final 26-24 was sealed by Cristian Savani after a spectacular defense by setter Natale Monopoli. Slovenian-born Alen Pajenk was MACERATA best scorer in this section of the match with 4 points and 80% of efficiency in attack.

Lube Banca Marche then asserted its supremacy in set 2 and 3 with a great show contributed by Cristian Savani, Simone Parodi and Ivan Zaytsev to the delight of some 2’000 spectators. The hosts quickly cruised to 12:7 and then 22:11 with great attacks from the back row and 3 aces before they finished it at 25-13 in the second set, with 7 points being contributed by Savani. The same scenario unfolded in set 3 (10:5, 21:15 for the hosts) where the Italians scored 5 aces, with 2 for Pajenk and 3 for Zaytsev (who ended up as best scorer with 18 points). MACERATA head coach Alberto Giuliani even gave some playing time to Luigi Randazzo, a member of the Italian junior national team that claimed gold at the European Championship this past summer in Gdynia.

“I am very happy with the victory and the first place in the group” said Giuliani. “ACH Volley showed a very good performance in the first set, after that everything was easy especially thanks to our serves”.

Andrej Flajs, captain of ACH Volley, added: “MACERATA is a very strong team and it is very difficult to play such a side if they serve like they did tonight”.