PHOTO OF THE DAY: Zaytsev appears on games with new tattoo, a controversial one…

Ivan Zaystev got himself a new tattoo, the kind that beach volleyball players usually wear. 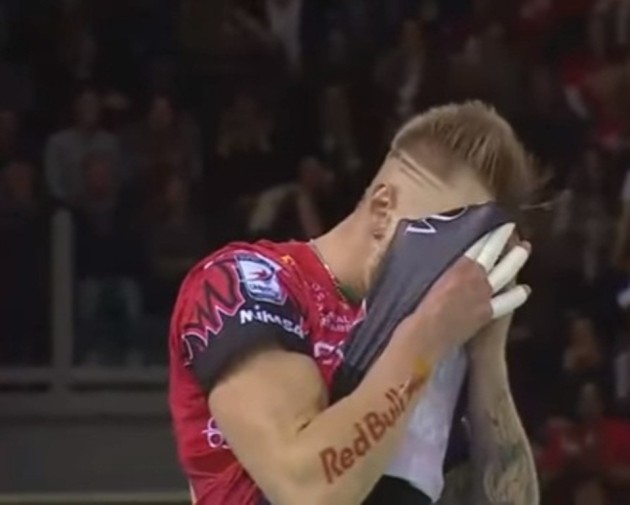 An Italian Men’s Volleyball superstar Ivan Zaytsev dedicated his latest tattoo to his personal sponsor „Red Bull“ (the most popular energy drink in the world), by putting their logo on his right forearm.

He has done it due to the fact that Italian Volleyball League Serie A1 recently banned commercial sleeved undershirts. Since Zaytsev was wearing this logo on the sleeves, he had to find the new way to make his sponsor visible.

Zaytsev debuted with the „Red Bull“ sign on his forearm in Round 8 match of his team Sir Safety Conad Perugia and Tonno Callipo Calabria Vibo Valentia, nine days ago, and kept it for the big derby against Cucine Lube Civitanova, two days ago.

The tattoo is a temporary one but in case he decides to keep it for international matches with an Italian National Team (if he gets summoned again after being expelled due to an issue with his footwear, this summer), he might face a ban from the International Volleyball Federation (FIVB) since no tattoos of this kind are allowed under their game rules.

SWE M: „Pancake“ is the most difficult dig, but some players can even make point out of it! (VIDEO)

Now Italian Superlega wants to ban this things also in the middle of the season. Last year there were no problem, but after this summer and problems, Superliga started to make problema out of it…

For years now, the guy has performed bad/very mediocre for his clubs. The fact that he is still considered a ‘volleyball superstar’ by WoV only shows his brilliance in self-marketing…..

You must hate him or joking right?? He has always been one of the best players in Seria A for years and was great in Russia as well.

Re: @Mateo
His two seasons at Dinamo were very far from impressive. In the end he was second choice behind ‘superstar’ Pavel Kruglov. Last year, while having decent receiving stats, he was a below average attacker. I give him credit though, for being there when it mattered most during rio olympics. But his club performances during last three saesons imho don’t back up his ‘fame’.

Italian Federation is wrong and so is FIVB. They should allow volleyball players to get much sponsors as they can. This is a way for them to make extra money especially because they don`t make as much as other athletes make.