The drawing of lots for the final round of the 2013 boys’ and girls’ CEV Youth Volleyball European Championship took place at the Metropol Palace hotel today in Serbia’s capital city. Read latest volleyball news on Worldofvolley.com. 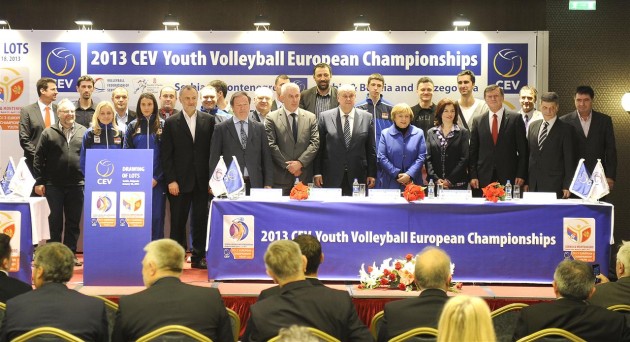 The drawing of lots

The top six teams for each gender will qualify for the 2013 FIVB Youth World Championship. The boys’ championship will take place in Tijuana and Mexicali (Mexico) from June 27 to July 7 and the girls’ in Nakhon Ratchasima (Thailand) from July 5 to 14.

A series of prominent guests attended the drawing of lots ceremony, including CEV senior vice-president and chairman of the Volleyball Federation of Serbia, Aleksandar Boricic, CEV vice-president and jury president for the girls’ competition, Jan Hronek, Serbia’s Sports and Youth Minister Alisa Maric and the Minister of Sport of the Republika Srpska, Nada Tesanovic.

The three host countries – Serbia, Montenegro and Bosnia & Herzegovina – were represented by their highest volleyball authorities. In attendance were presidents Cvetko Pajkovic and Luka Juric, representing Montenegro, and Bosnia and Herzegovina, respectively. A number of media representatives were also present.

The participating teams were drawn into preliminary groups by the captains of Serbia’s youth national teams. They were joined on stage by volleyball legends, Vladimir Grbic and Igor Vusurovic who were Olympic champions in 2000. The drawing of lots was carried out under the supervision of ESOC Coordinator, Willy Bruninx.  The teams were drawn to ensure that sides coming from the same qualification tournament were not going to compete against each other more than once, from the start of the final round.

The 12 teams qualified for the final round of the girls’ championship set to run from March 29 to April 7 in Bar (Montenegro) and Kladovo (Serbia) were drawn as follows:

The 12 teams set to compete in Laktasi (Bosnia and Herzegovina) and Belgrade (Serbia) from April 12 to 21 in the tenth edition of the Boys’ Youth Volleyball European Championship were drawn as follows: