With about 1’000 fans in attendance, Turkey’s Maliye Milli Piyango ANKARA edged on Thursday the hosts of Jihostroj CESKE BUDEJOVICE with the score of 3:1 (21-25, 25-15, 25-23, and 27-25) in what was their first clash for the Challenge Round of the 2013 CEV Volleyball Cup – Men. This and other volleyball news read on Worldofvolley.com. 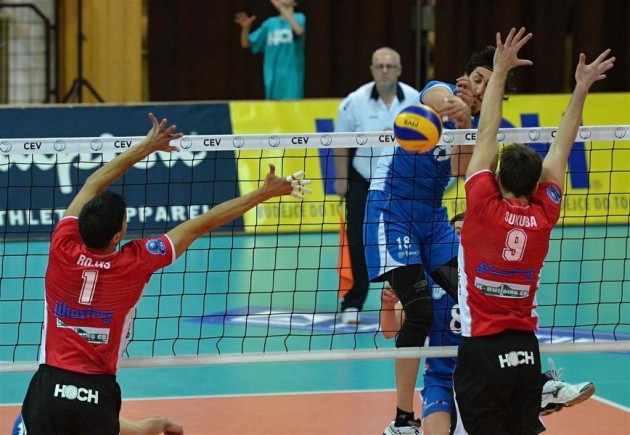 Even though they eventually lost the match, the home heroes had caught a good start setting the pace of the game in the opening set as they had started their quest without libero David Juracka and their best spiker Andy Rojas. Jihostroj had chosen wing-spiker Petr Michalek as their libero but still the Czechs could impose their supremacy going up 18:14 and 20:18 before closing it at 25-21.

The guests from Turkey, however, bounced back in set 4 moving up 14:9 and with a superb display of power and technique from the serving line by their Serbian player Marko Ivovic they could easily keep control of the operations (16:8) and finish it off with a speedy 25-15.

Jihostroj changed their setter in the third set opting for Petr Zapletal who replaced Filip Habr; with their spiker Peter Platenik on fire, the Czechs went up 8:5 by the first mandatory stop and fought bravely supported by their many fans (16:13). Habr moved the score to 18:13 with some excellent serves but Ivovic restored the balance for ANKARA, eventually propelling a terrific final rush by his side that could move the charts to 2:1 (25-23).

Jihostroj seemed capable of calling for a tie-break as the Czechs got a margin of two points by the second technical time-out but their best spiker, Peter Platenik, got injured by the score of 17 all. In a close final rush Maliye Milli Piyango once more had the upper hand and could celebrate a 3:1 win edging their opponents in all fundamentals and especially from the serving line where Ivovic scored 5 aces all alone.

“It was a very good match and I have to recognize that our opponents served really well tonight. It is a pity that Platenik got injured during this game but next week we’ll fight with all our hearts in Ankara to make it to the semis” said Czech middle-blocker Radek Mach.