The roster of Noliko MAASEIK includes very talented guys. Opposite player Wannes Rosiers fully belongs to this group as he recently completed his Ph.D. in Mathematics at the University of Antwerp. 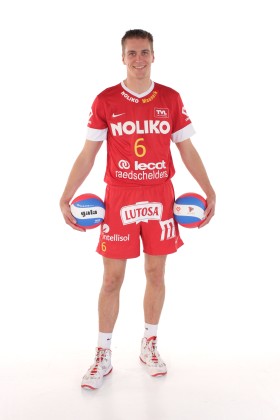 “I decided to focus on my studies with the ambition to complete this Ph.D. program. I am proud for achieving this goal and grateful to Noliko MAASEIK because they provided me with the chance to test and discover my skills as professional Volleyball player. For any Belgian player Noliko is simply the best you can get; this club is very professionally structured and organized so that you can focus primarily on Volleyball” says Rosiers.

Wannes started his Volleyball adventure by representing VC VOSSELAAR and after moving up to the first division of the national league, he was transferred to Toyota Wauters AVERBODE. After that he played for Aquacare HALEN before joining Noliko MAASEIK in 2011. “Noliko’s goal is to claim the national league and perform well in the CEV Volleyball Champions League, so you get a series of high-level matches throughout the season, the perfect arena for any player to test his skills and continue his development” stresses Rosiers. “Unfortunately we could not make it to the Playoffs 6 but we played a good return match with Zaksa KEDZIERZYN-KOZLE here in Maaseik and it was really close in the end. We are topping the standings of the national league and most probably we’ll be fighting for the title with Knack ROESELARE and Precura ANTWERP. We also qualified for the final of the national cup to play there on February 17 our archrival ROESELARE, so I think that so far we had a good season” he continues.

Right before the start of the 2012/2013 season, Rosiers was chosen to captain Noliko after previous team leader Jo Van De Craen had moved to Soleco HERK-DE-STAD. “I feel honored and I try to help and assist my teammates as much as I can”. What about the future? “My contract comes to an end this season but there is an option for another year. I am sure that we will evaluate this opportunity at the end of the season and come to an agreement” concludes Dr. Rosiers.