National team preparations can often be long and hard, especially physically, but also mentally, because the players are away from home, in a special mode, usually, all this comes after a hard club season… 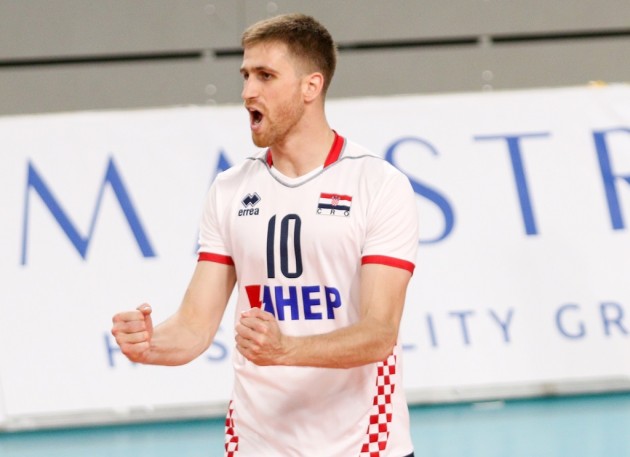 But it is not always, and preparations do not fall hard on everyone. Namely, Filip Šestan, a 195 cm tall outside hitter who will turn 26 in a month, really enjoys the preparations in Zadar – because he is at home! This guy, born in Zemunik, could hardly wait for the gathering of our national species because it is always the most beautiful at home.

„I really could hardly wait for the preparations, nor did I need a longer break after a hard club season,“ – says Filip, one of the most reliable volleyball players from the list of coaches Emanuele Zanini.

„I was even supposed to come before home, but the celebration at the club took longer after we won the title.“

It is about the Romanian team Arcada Galati, in which he played last season, after playing for the ‘angry’ competitor, Universitatea Craiova, two years ago. Before that, he played in Padua and Ribola Kaštela.

„It was a long, difficult and hard season, in the end, crowned with the title of champion, which will only be remembered later. We started on August 1 with the club preparations and finished the championship two weeks ago, but the club and the city lined up with celebrations, so it took a little longer.“

In addition to the domestic trophy, Sestan’s club also played successfully at the European level.

„In the end, we won fifth place in the CEV Cup, losing to the champions Dinamo from Moscow. Yes, it was a good season, both for the club and for me, I am satisfied with how I played.“

They are also very happy in Galatia, so they offered him a new contract.

„Yes, but I have not decided anything yet, because I am valid for some other offers, from some stronger national leagues. But I will not wait long, it would not be correct, but I will soon ‘cut’ and decide.“

And until he does, he will do two strong workouts a day under the menu of Italian expert Zanini.

„Even though he came a few days later for the preparations, because the Croatian championship took longer, and he also took the title from Mladost, there were no problems, because he has already set up a system that his assistants have just followed. My former teammate Tomislav Ćošković, who is now Zanini’s first assistant, stood out especially as a coach. It’s good that we know Zanini’s volleyball philosophy because we don’t have much time available anyway, but this weekend is the first, and next is the second qualifying tournament to go to the European Championship.“

Strong two tournaments in which the former Olympic champion will have to beat the Netherlands and Sweden.

„We know the Dutch, we played with them in the past period, so although they may be the favorites of the group, we do not give up. The Swedes are a much bigger unknown, but no matter what, our tactics are clear – we are going head to head against each other, so whatever. We really want to perform at the European Championships, and we will do everything to make it happen. Luckily we are in the strongest lineup at the moment, there are no major injuries, the atmosphere is great and there is no reason not to show good games. Especially in my Zadar…“