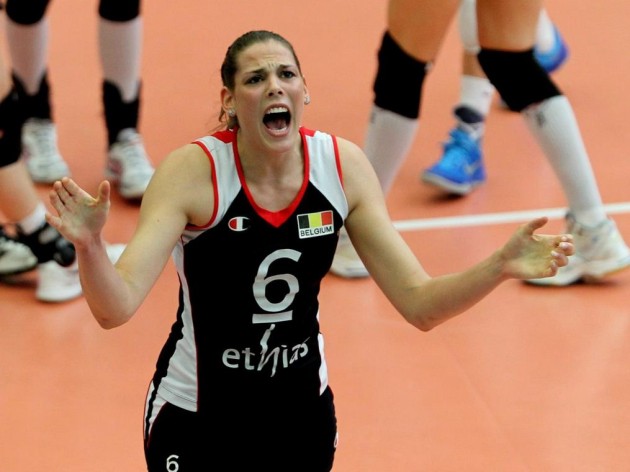 “This does not surprise me because we have been playing for quite some time at a much higher level than the teams we have seen here” Belgian mentor Gert Vande Broek says. “However, our long-term goal is to make it among the top 8 nations in Europe and I think that with this group we have got the skills necessary to fulfill our ambitions.”

Charlotte Leys set the tone for the home side in the first set as she served nine times and caused real problems to Switzerland’s defense line. Hélène Rousseaux and Laura Heyrman did also play well for Belgium and it was Leys who finished it off at 25-13 with a kill-block. The match followed a similar plot also in the second set where the blocks killed by Rousseaux and Freya Aelbrecht contributed the first gap for the home side. Elena Steinemann and Ines Granvorka attempted a late comeback for the young Swiss team but the duo composed of Frauke Dirickx and Charlotte Leys – who spent the past season together in Poland – paved the way for a massive 25-10.

“My players did not show their full potential in the first two sets, it was like going back to the past” Swiss mentor Svetlana Ilic commented. “They are improving but they have to change their mindset too. This eventually happened in the third set.” Laura Sirucek was indeed able – with her serve – to turn the score around from 5:8 to 12:8 for Switzerland and the final stage of the set was very close before Leys finished the game for the triumph of the Belgian ladies.

Portugal finished third in the standing of the group as the players mentored by head coach Luis Sousa edged Northern Ireland in straight sets (25-13, 25-12, and 25-9) to claim their first and only victory in the tournament. Right from the start of the game the players from Northern Ireland – who had previously suffered two speedy defeats to Switzerland and Belgium – showed their intention to display a much more solid performance. However, Portugal went up 7:1 in the first set on a serving turn by Fabiola Gomes. Eduarda Duarte and Nuria Lopes da Silva paced Portugal but Northern Ireland could bring home 13 points in the end well supported by Claire Dowey. They almost repeated that same performance in the second set where they got 12 for the pride and joy of team captain Chloe Walkingshaw. However, Portugal dominated the scene in set 3 (25-9) with their best scorers Nuria Lopes da Silva and Joana Polido setting the tempo for a well-deserved 3:0 win.

To find all the detailed information click on Statistics.