Some athletes dream of careers blessed with titles and trophies. Others just want to compete and that both players and fans are left with a beautiful memory of their extraordinary achievements, and there are others who expect nothing but to spread love and affection. However, only once in every generation is born one who achieves all three. That was Ingrid Visser. An angel of Volleyball. She played for VC Nesselande Zevenhuizen, VVC Vught, Minas Tenis Clube, Minetti Vicenza, Hotel CANTUR, CV Tenerife, DELA Martinus Amstelveen, CAV Murcia and Baki Baku. 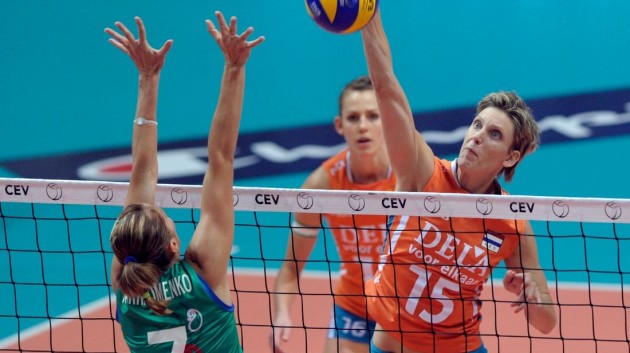 Born in the Dutch town of Gouda, Ingrid Louise Visser would have turned 36 next week. From early on, besides the constant smile she was noted for her height and ability for sports. At a very young age she understood something that would mark the rest of her life: her passion for volleyball. She was just seven when she began to enjoy the thrill of sports and joined VC Nesselande Zevenhuizen. She developed as a player, and spent ten years in the team. And so, at 17, the 1.92m tall player caught the attention of VVC Vught, one of the most powerful teams in her country.

At that time, she improved and shown she was agile and extremely fast for her height and was called for the senior national team of Netherlands. It was in 1994, a friendly match against Ukraine. It would be the first of the 514 times she would wear the shirt of her national team. No one else in the Netherlands has reached that number.

At just 18, she won the first major title of her career, the European Championship. It was a mythical tournament for the Dutch volleyball, as the national team, coached by former Unicaja Almería coach Bert Goedkoop, took advantage of their home court to defeat Croatia 3:0 in the final

It was the first title for the Dutch Angel. In fact, the following season, Visser won the League and Cup. After that she left her country and decided to try a new adventure in the Brazilian league playing for Minas Tenis Clube. There she caught the attention of the world’s most powerful league, Italian Serie A. She went to Minetti Vicenza and won her first European club title, Challenge Cup 2001.

The following year, the Italian club’s financial problems forced her to leave. And that’s when she first came to Spain. She played for Hotel CANTUR, which at that time had just qualified for the top female division. In his first season, Visser and her team were the league runner-ups. It was her quality that contributed to Hotel CANTUR which won the title the following year by defeating CV Tenerife.

His extraordinary level of play, its seriousness on the field and her character led to a signing with CV Tenerife. The late and lamented President of the Tenerife club, Quico Cabrera was known, among other things, to bring not only players who are great at volleyball, but who are also exceptional people. Visser won three La Reina Cups and three Superliga titles. Furthermore, Visser was one of the key pieces in the greatest achievement in the history of any Spanish club: the 2004 Champions League.

It was a dream tournament, one of the most extraordinary in the history of the sport, some games that will be forever remembered by all who were lucky enough to see them. Ingrid Visser shined in this success. So much, that the Dutch made the final block that crowned them European champions.

In the 2007-2008 season, Visser return to her country, to DELA Martinus Amstelveen, and played for the Dutch national team. That year, they won the Grand Prix. In the final match, the Dutch led by Visser defeated Russia. It was another magical moments Visser, who scored 11 points, three blocks and one ace and captained the team to the top of the podium.

After one season in the Russian league, the Dutch came back to the Spanish league, CAV Murcia 2005. With Murcia she won La Reina Cup. She played in the Spanish league for two next two seasons. In 2011-2012, Visser signed for Baki Baku and after that season, decided to retire and end one of the most spectacular sporting careers in European Volleyball.

She will be rememberd by her great block, her effective and very fast spikes in the middle, and above all her sweet and kind character. All who were her teammates, and all who were lucky enough to see her from the other side of the net could see her great human value.

The world of Volleyball has not only lost one of its best players in recent years but a person who dignified the sport by her character. However, the light of this angel can’s be turned off, because it will shine forever in the memory of those who enjoyed the fortune of knowing her.