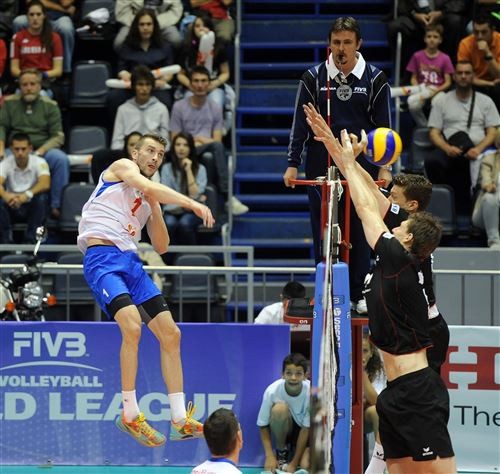 Nikola Kovačević scores against the Germans

Germany started the match with two excellent blocking kills to take an early (3-1) lead. Through the second technical time-out, the hosts maintained the gap of four points (16-12).

At (17-16) coach Kolaković had to ask for a time-out, which resulted in restoring the four-point lead at (21-17). Then Serbia started to struggle.

Germany managed to stop Atanasijević on couple occasions, and reached the tie at (22-22), and then grabbed the lead (23-22). Kaliberda’s spike sealed the first set at (25-23) for the visitors.

Germany fought back in the beginning of the third set with an early (8-4) lead. The teams battled hard for each and every ball, but at (23-22) for the hosts, excellent triple block by Serbia, followed by Atanasijević’s killing spike made it (25-22) and 2-1 in sets for the home side.

Serbia started the fourth set better, going up (8-4) before the first technical time-out. After the break, Germany pushed very hard and turned the score upside down, going up by three points at (12-9) and maintaining the steady lead all the way until the very end, forcing a tie-break.

In the tie-break, Serbia got an early two-point lead and successfully maintained the gap until Germany tied the score at (10-10). From that moment on, the crowd could see a great battle between the two teams.

Atanasijević wrapped up the match with potent spike for (15-12) and 3-2 overall.

Aleksandar Atanasijević of Serbia topped the scorers chart with 31 points, while Denys Kaliberda scored 20 for the winners.