As the excitement of the World League Finals winds down, Andrea Zorzi takes a look back at the action and why he believes that we are now looking at the 'start of an era' 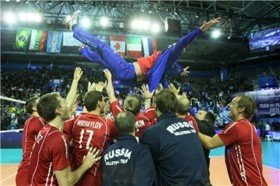 “Many times when Russia won the World League we thought a new era had begun but then other teams beat them. After the Olympics, Russia confirmed their supremacy. Usually Brazil was the dominant team in international competition but now Russia seems to be in control. It is ominous for other teams if Russia is able to do this with the change of players which they had. If they find consistency in realising their potential they can dominate men’s volleyball.

“Bernardinho said after the final that Russia is like a player factory and I agree with him especially considering they also won the Boys’ U19 World Championship earlier this month. They proved that they can change eight players and the coach and still maintain a high level of performance. This comes more from having technically good players rather than an overall strategy. Russia relies more on physical and technical skill but it was still impressive that they managed to gel so quickly together and play so well as a team.

“The pace of Russia’s attack and the relationship between Grankin and Pavlov were outstanding and were the major difference. Pavlov in particular was mightily impressive. As an opposite, he’s not so big and tall as many opposites are so he has to exploit what skills he has and he was quick and agile, beating the block more with pace and guile, rather than brute strength. Historically the setter was the one major weakness for Russia but in recent years with Butko and Grankin, they have one of the best in the world and he played a superb final.

“After their stunning performance to win their third World League title, of course Russians are favourites for the European Championships but it won’t be easy for them. The other countries – including Italy and Bulgaria – will have a month now to prepare. The skill level during the World League and the final was not so high compared to the Olympics and previous World Leagues and this can be put down to the fact that it is the start of a new Olympic cycle and there are many new combinations within the teams so Russia will have to keep improving if they want be European champions. Remember Serbia is the current European champions after beating Russia in the semi-finals in 2011 while we can’t forget about the likes of Poland and France.

Andrea Zorzi is a former Italian volleyball star who won two FIVB Volleyball Men’s World Championship crowns in 1990 and 1994 as well as three World League titles from 1990-1992 where he also won the Most Valuable Player award at both the 1990 and 1991 editions. He was also a silver medallist at the 1996 Atlanta Olympic Games and won the 1989 European Championship in a career which spanned 325 matches. After retiring in 1998, he collaborated with a number of important Italian TV networks as well as international newspapers as a journalist.

To read more about the latest competition, click World LEague 2013.

What happens if the ball goes out...