Iran achieved their second Pool B victory at the FIVB Volleyball Men's U21 World Championship in Turkey by shutting out Argentina on Friday afternoon. In what was the South American team’s opening match at the tournament, Ferhad Nafarzadeh’s squad brought them disappointment, but pleased the numerous Iranian fans on the stands by claiming a 3-0 (25-19, 25-20, 25-18) victory. 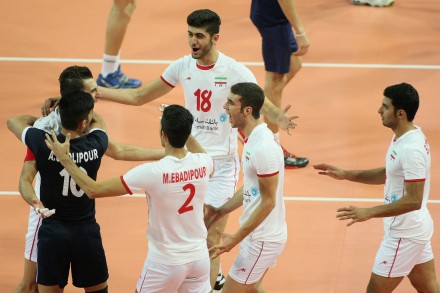 Iran celebrate their second victory at Baskent Hall in Ankara

In the first set the Iranian team were very successful in offence, but the Argentineans facilitated them for the eventual 25-19 with excessive unforced errors. Led by Pablo Koukartsev’s spiking efforts, the South Americans also put some pressure on the opponents with their attacks in the second set, but this gave a chance to the Iranian block to shine. Fabian Muraco’s players continued to lack precision in their game and eventually lost by 20-25. It was a similar story in the third set and Iran continued to dominate to secure a 25-18 victory in this final part and 3-0 in the match.

Pablo Koukartsev topped the scorers’ chart of the match with 10 points. Ghara Ebadipour and captain Javad Hosseinabadi contributed 9 each to Iran’s victory.