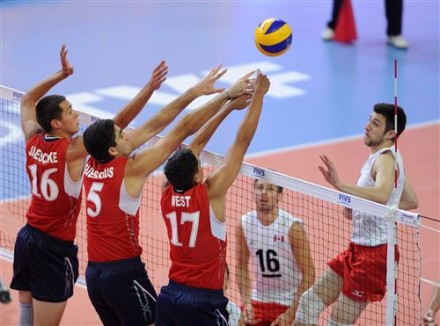 USA’s block, too strong for Canada

USA played their tournament’s best performance as they fought for each ball aiming to win in straight sets which make them improve their pool final ranking.

Now USA, Tunisia and Canada were tied in points (6 each), number of victories (2 each) and the set quotient (7-7), where point quotient decided USA second of the pool, Canada third and Tunisia fourth. The direct face off between Canada and Tunisia (Canada won 3-1) settled the situation between the two teams as they were tied also in point quotient.

Among all USA highly performing stars Benjamin Patch was in an outstanding form as he was the match scorer with impressive 20 points followed by the efficient outside hitter Thomas Jaeschke who scored nine.

From the Canadian side the Stephen Maar was his team scorer with 13 points followed by Bradley Gunter who scored 9.

USA played the match with higher motivations where they showed a powerful attacking strategy beside advancing in the blocking activity having 9-6 advantage over the Canadian team.

Can someone catch attacks of the tallest...