India earned their third consecutive victory at the FIVB Volleyball Men's U21 World Championship in Ankara to finish second in Pool A. On early Monday afternoon at Baskent Volleyball Hall, the team around coach T.C. Jothish won the direct duel for the runner-up position with China by 3-0 (25-21, 25-23, 25-18) in the all-Asian clash between the world’s two most populated nations. 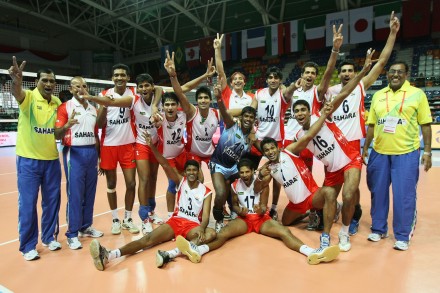 Indian setter Kumar N. Yashvanth nicely spread out his team’s offence in a very competitive first set to find their way around the well-performing Chinesse block and earn the victory at 25-21.  The story continued into the second set as the Indian spikers, especially Anup D’Costa, continued to add one point after another onto their team’s tally.  Captain Lavmeet Katariya stepped up his blocking efforts and this way India were able to make up for the many unforced errors and win the set by 25-23.  In set three China already seemed to have given up.  India established total domination on the court and piled up a solid advantage with Khoiwal Suresh’s block-out responsible for the last point of the match shaping up a 25-18 final result of the set.

Anup D’Costa was the top scorer of the match with 17 attacking points for India.  Team-mate Lavmeet Katariya added another 14 to his team’s account, five of which he scored by blocking.