Noliko MAASEIK re-asserted its dominance in domestic competitions this past Sunday by claiming Belgium’s national cup in Antwerp edging Euphony ASSE-LENNIK in straight sets in front of 5’400 spectators at Lotto Arena. 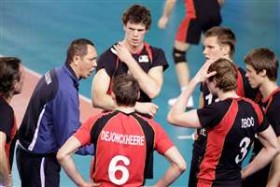 Claudio Gewehr steps down from his position, new head coach wanted in Belgium

Noliko joins the Playoffs of the national league being the absolute favorite to retain the title, but the quest is open for the second ticket at stake to represent the country in the 2013 CEV Volleyball Champions League. ASSE-LENNIK, Knack ROESELARE, Prefaxis MENEN plus Topvolley ANTWERPEN are all potential contenders for that much wanted pass.

Some more news from Belgium: the head coach of the men’s national team, Claudio Gewehr (pictured), after six years at the helm of the group and having qualified twice for the final round of the European Championship, has decided to step down from his position. His contract was originally lasting up to late August but the Royal Belgian Volleyball Federation is already looking for his follower who shall be appointed in the next few weeks. The new head coach will be given the goal to take the group to the final round of the 2013 CEV Volleyball European Championship taking place in Denmark and Poland also via a second round qualifier that is slated for next September in Belgium.

BEHIND THE SCENES: Photo shoot of Manon...