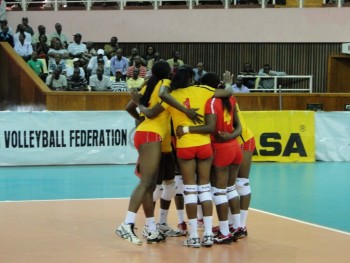 Tunisia’s receiver Nihel Ghoul was the key factor in this victory with her unstoppable hits from position 4 as she was her team and match scorer with 21 points followed by Khouloud Jenhani who scored 11 points. Algeria’s middle blocker Mouni Abderrahim contributed 18 points for her team as the best scorer for her side followed by receiver Fatma Djouad 15 points.

What made the difference was in the match was the better blocking activity for the Tunisian team as they had 12-9 dominance beside their better reception which allowed them to put their attacking strategy.

After Tunisia won the first set, the Algerian team came back aggressively in the second set to settle the draw 1-1 before Ghoul played her best to lead Tunisia to win the third set. Algeria regained their rhythm in reception and attacks to allow her team to draw 2-2 and extend the match to tiebreak. The Tunisian team was more aggressive in attacks in the tiebreak as they succeeded to dominate the set completely to win 15-6 and the match 3-2.

The middle blocker Nana Tchoudjang and Mballa Eba’a played a great role in the victory as the first was her team scorer with 20 points while the second has 5 stuff blocks in the crucial moments of the match. Egypt’s Aya ElShami was the match scorer with impressive 27 points.

Cameroon started the match with a good blocking activity to win the first set after big fight in the last few points. Egypt controlled the second set and used their big gun Aya Elshami to win the second set and level the score to 1-1. Again Cameroon led in the most exciting set 26-24 before Egypt widely won the fourth set 25-15 to extend the match to tiebreak where the Cameroonians were more stable to win comfortably 15-8.

The Kenyans used the experience of their stars like captain Brackcides Khadambi and receiver Everlyn Makuto to dominate the match although the Senegalese players were competitive throughout the match specially in the first set.

Rules for dynamic and static stretching