The bronze medallists from the London Olympics and this year’s World League could resist to a spirited home side since Denmark had got off to a flying start as the local fans had created a great atmosphere at Arena Fyn. However, Italy could gradually impose their quality and eventually cruised to a well-deserved straight win (25-22, 25-17, and 25-15). 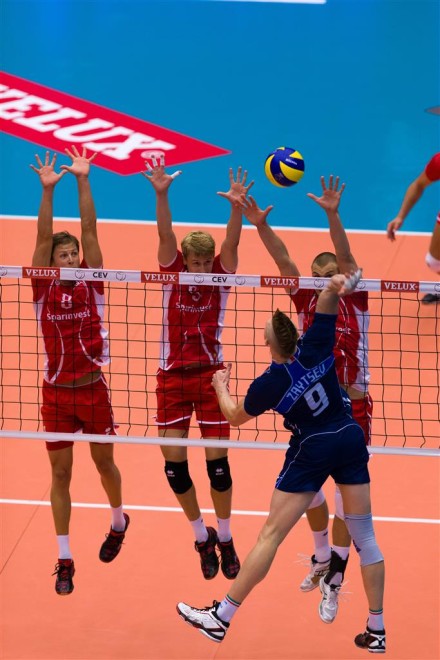 With 3,400 fans in attendance at Arena Fyn Italy downed the home guys of Denmark in straight sets (25-22, 25-17, and 25-15) to start their quest for another medal with the right pace. Denmark was playing their first European Championship final round game in 42 years and wanted to show they did deserve to be here. The home side started out strong (3:0) but the bronze medallists from the London Olympics responded quite promptly taking the lead for the first time at 8:7. Though the home fans had created a very nice ambiance at Arena Fyn, the guys mentored by Mauro Berruto did not bother that much and could stand the fierce resistance by the Danes to claim the opening set at 25-22.

Denmark got off to a flying start also in the second set but Italy fired back to move to the front at the first mandatory stop as it had done in the first set (8:7). Italy gradually found their best game and cruised quickly to a relatively comfortable 25-17.

The third set was a carbon copy of those that Italy had claimed before with an early 8:7 lead and the bronze medallists from this year’s World League confirming their ambition to go for gold with Ivan Zaytsev scoring the last point at 25-15.

Check out game photos in out Galleries.

To read similar news from this competition click on European Championship 2013.