Zurich, Switzerland, March 14, 2012. Even though they did not display their best Volleyball, still the ladies of Volero ZÜRICH could extend their winning series in Switzerland’s national cup by downing their opponents of Hôtel Cristal VFM in straight sets (25-18, 26-24, 25-18) in front of some 3’100 fans in Bern. This is the seventh time in history that the trophy is being claimed by Volero. 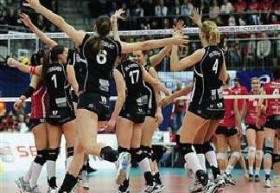 The team that had made it to the 1/8 finals of this year’s CEV Volleyball Champions League losing there to Azerrail BAKU dominated the scene in the opening set but was well pressured in the final rush of the second set as VFM scored five points in a row to draw level at 24 all.

However, Volero stayed cool and a block of Olga Sazhina followed by a great attack of Jelena Alajbeg eventually sealed the final 26-24.

Alajbed contributed also the last point of the match that ended after 77 minutes of play.

Although head coach Svetlana Ilic is used to claim domestic competitions, still she was really happy with this win: “The national cup is extremely important here in Switzerland, much more than in other countries like in Serbia where I actually stem from. I am also happy that the players stayed cool and played well the deciding rallies” she says.