Schwerin, Germany, March 14, 2012. After seizing Germany’s national cup this past March 4 in Halle/Westfalen by edging their archrivals of Rote Raben VILSBIBURG, the players of SCHWERINER SC had a very busy week while celebrating their fourth title in this competition as they had already finished on top in 2001, 2006 and 2007. 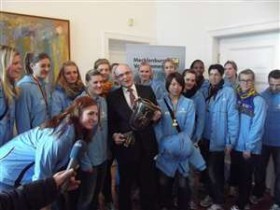 One day after scooping the cup the team of head coach Teun Buijs was invited to a reception in the office of the Minister-President of the Federal State of Mecklenburg-Vorpommern, Erwin Sellering (see picture).

With warm words Mr. Sellering congratulated the team on their success and honored the good performance which he had followed live at “Gerry Weber Stadion”. He was indeed there together with some more 600 fans from Schwerin and he also presented the trophy and the medals to the winning team.

By clicking the glasses with the head of state of Mecklenburg-Vorpommern the official celebrations for that triumph eventually came to a close.

Next was the welcome of the team in the center of Schwerin by more than 100 fans. The team was overwhelmed seeing the crowd that had got together in front of the state chancellery and the supporters took their chance to have a look at the trophy, to celebrate the cup, to compliment the team on their success and to get in touch with the players and coaches: many photos were taken and the team signed a lot of t-shirts, posters, etc.

In the evening the team was invited to join a live program broadcast by NDR, the local TV station and partner of SCHWERINER SC.

In the daily news show “Nordmagazin” the SSC presented the cup and was asked about this highlight. With this the party finally ended as on the next day a trip to Stuttgart for the match against Smart Allianz was scheduled. This game resulted in a clear 3:0 (25-12, 25-21, 26-24) for the SCHWERINER SC while Smart Allianz is still hoping to finish eighth at the end of the regular season to make it to the Playoffs.

Straight from the match in Stuttgart the team traveled to Heidelberg where it stayed in a sports school to calm down after so many exciting days and to prepare for the match in Sinsheim which was also won in straight sets (25-21, 25-21, 25-11) as well as to get ready for the upcoming Playoffs.

Now the German champion is waiting for the last match before the Playoffs against VfB SUHL. As SUHL is still competing in the 2012 CEV Volleyball Challenge Cup and will play tonight at home against Baki BAKU (AZE) and the upcoming Sunday in Azerbaijan, the last match of the Bundesliga main round which was scheduled for Saturday, March 18, had to be postponed to March 20. After completion of the regular season SCHWERINER SC will know the name of its opponent for the 1/4 finals that are starting on March 24.