Dominique Baeyens is the new head coach of Belgium men’s national team as announced in yesterday’s press conference whereby his name was finally revealed to the media some weeks after his colleague Claudio Gewehr had stepped down from that same position. 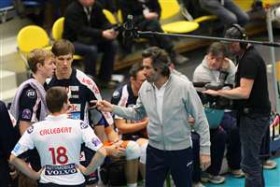 While Vital Heynen – the long-time mentor of Noliko MAASEIK – is about to start his adventure at the helm of Germany’s national team, quite many Belgian and foreign coaches had submitted their application to replace Gewehr but eventually the Royal Belgian Volleyball Federation opted for Baeyens who had recently stated he was going to quit, after 15 years, Belgium’s second top club, Knack ROESELARE.

While being active as a player, the 56-year old Baeyens enjoyed a very successful career with Maes Pils ZELLIK making it three times in a row to the final four of the Champions Cup (1993-1995) and claiming twice the national league.

After spending six seasons in Zellik, Baeyens started his coaching career in Roeselare, and with this side he was able to claim the Top Teams Cup in 2002, finish as runner-up as the final four of the CEV Cup was held in Rieti (Italy) back in 1998 and he anchored his guys to the Playoffs of the CEV Volleyball Champions League for quite many times.

As far as the domestic competitions are concerned, Knack ROESELARE was crowned Belgium’s national champion for a total of six times under the guidance of Baeyens, with the showcase of this side including also four editions of the national cup and five of the Supercup.

Baeyens – who has been named Belgium’s “Coach of the Year” for a total of eight times – will have the primary task of booking a spot for the final round of the 2013 CEV Volleyball European Championship to be jointly hosted by Denmark and Poland. This coming September Belgium and namely the city of Kortrijk will play host to a second-round qualifier whereby the local guys will have to test out the likes of Estonia, the Netherlands and the winner of first-round home and away matches starring Israel and Andorra.

As for Gewehr, he will continue his work for the Royal Belgian Volleyball Federation devoting his time to the coordination of the activities performed by young Volleyball coaches and to the programs of the national teams, while his former assistant Emile Rousseaux – who is also the head coach of the junior national team – will replace Baeyens in Roeselare.