The first round of the Polish derby opposing Politechnika WARSZAWSKA to Tytan AZS CZESTOCHOWA in the final stage of the 2012 CEV Volleyball Challenge Cup did end on Tuesday night with a 1:3 home defeat for the guys from Poland’s capital city (24-26, 25-23, 25-27, 20-25); 2’000 fans in attendance at Arena Ursynow were not enough to help the home side cruise to the victory and this coming Saturday Politechnika will have to fight bravely to claim the return match in Czestochowa and go for the golden set there. 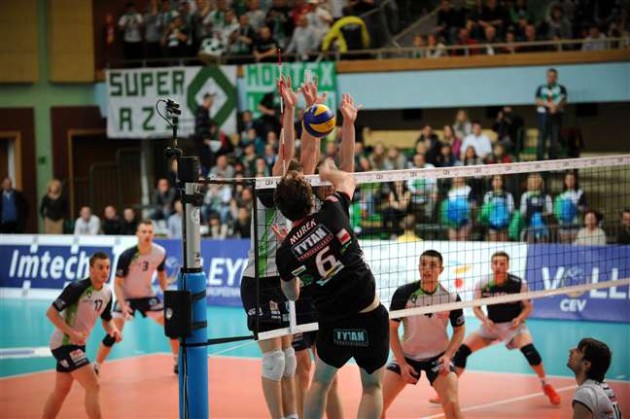 The score stayed very tight in the opening set up to the moment where the guests of Tytan AZS opened the gap moving the score from 9:10 to 10:14. Politechnika started its chase and helped by some errors of CZESTOCHOWA could eventually draw level at 19 all. Although home star Pawel Mikolajczak stood out with his service, he could not display that same quality in attack and so that section of the game ended in favor of Tytan AZS (24-26).

The guests opened strong in set 2 going up 5:3 but Politechnika fought back to even at 6. The home guys went to the front by the first mandatory stop (8:6) but the charts had already turned around only a few moments later as Tytan AZS was up by 2 (8:10). Head coach Radoslaw Panas asked for a time-out and started making some substitutions but CZESTOCHOWA widened the margin (10:14) with some great offensive play by Dawid Murek. After the second technical time-out Politechnika was finally able to storm back, drew level at 20 and accelerated for the 23:21. The home side showed much determination there and Grzegorz Szymanski – who had previously replaced Mikolajczak – finished it off at 25-23 for Politechnika.

Tytan AZS displayed some great play in the opening phases of set 3 enjoying a margin of five (3:8) and the great defense of Michal Kaminski made it difficult for the home side to score. As a result of this dynamic, CZESTOCHOWA controlled the game all the way through (10:16, 11:18, 12:20, and 14:23) until Mikolajczak went to serve for Politechnika and he literally crashed the defense of Tytan almost turning the score around (22:23). Even though WARSZAWSKA defended a set ball, this section of the game went eventually to the guests from southern Poland (25-27).

A similar story followed in set 4 with CZESTOCHOWA quickly going up in the score (3:6) but this time Politechnika stormed back earlier leveling at 9 after a block by Maciej Zajder and an ace by Maciej Krzywiecki. On the other side of the net, Krzysztof Gierczynski and Michal Wisniewski were outstanding in attack, so Tytan AZS gradually sailed away (14:16, 19:23) to wrap it up at 20-25 for the final 1:3.

TUR: IRCC is completed in Ankara