Romania’s Remat ZALAU re-asserted this past weekend its total supremacy in the domestic arena by edging Dinamo BUCHAREST in four sets (19-25, 25-22, 25-20, 25-23) to add the trophy of the national cup to its showcase that already included this year’s national league. 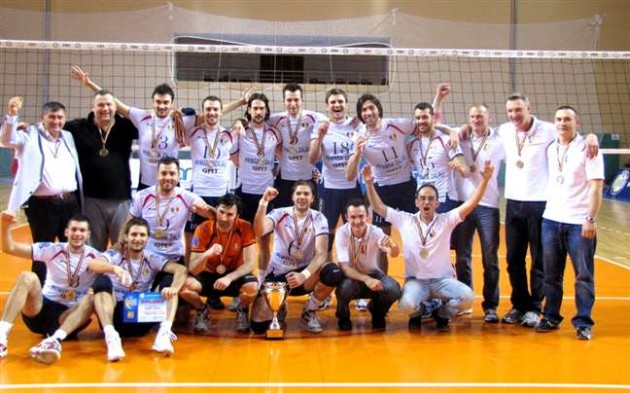 The final stage of this competition was held in Piatra Neamt with four teams fighting for glory there, namely SCMU CRAIOVA, Dinamo BUCHAREST, Remat ZALAU and Tomis CONSTANTA.

Remat ZALAU claimed the first semifinal against Tomis CONSTANTA in straight sets (25-23, 25-18, and 25-23) imposing its rule once again after those sides had crossed their ways in the finals of the national league, while in the second Dinamo BUCHAREST downed the ambitious side of SCMU CRAIOVA after a breathtaking five-set match (22-25, 26-24, 16-25, 25-19, and 15-13).

Dinamo BUCHAREST didn’t show that same strength in the final with Remat despite a courageous attempt to take control of the operations. Remat ZALAU eventually outclassed the guys from Romania’s capital city and claimed the national cup in front of some enthusiastic fans from Zalau and the local audience, thereby achieving its last goal for this season.

“The match with Dinamo wasn’t an easy game. The fact that we had won the championship only a few days ago certainly motivated the players even more and for sure this was an advantage for us. We are happy that we could reach our target and I want to congratulate the entire team for the great results we clipped throughout this season” he said.

Zoltan Mozer, the captain of Remat, stated: “I am so happy that we claimed the Romanian Cup, especially taking into consideration the fact that we were a bit tired after the previous match and also that Dinamo played very well for the entire game. We hesitated a bit at the beginning of the match, but we managed to deal with their tactics. After this season we can be very content for having achieved all of our goals”.

Liviu Ciupe, one of Remat ZALAU’s main sponsors, remarked that the good results of the team were determined by the hard work and the great attitude regularly showed by all players.

“We had only one defeat this season and this shows very well how much the players from Remat wanted to win” he said.

The Mayor of Zalau and Co-President of the team, Radu Capilnasiu, also wanted to congratulate the players and the coaching staff of Remat for such a memorable season.

“A decisive factor for all these achievements was the team work and also the fact that Mariusz Sordyl is a very good coach. I hope that we will have a good group for the next season as well” he concluded.

OG: Olympic spirit is in the air in Ankara