The Saint Martin Region in Peru will host the XIV Women’s Pan American Volleyball Cup as it was confirmed at the Sports Organizing Commission Meeting of the Norceca Confederation. 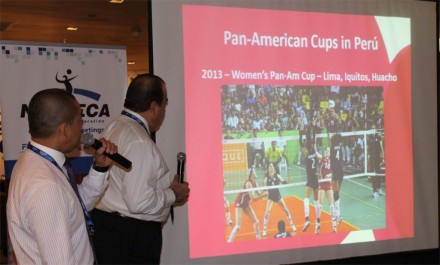 The Cup, an event sanctioned by the Pan American Volleyball Union, was presented by the Peruvian Volleyball Federation, whose President, Luis Linares Pablo attended to the meeting celebrated in Tijuana, along with South American Confederation President, Rafael Lloreda.

The tournament celebrates its first 14 years and will return to South America, after Peru hosted it in 2013, by playing matches in the cities of Iquitos, Lima, Callao and Huacho.

This time among the cities chosen to host the competitions is Tarapoto. “We want the tournament to be played in cities with touristic attractions. In this case Tarapoto is a city with natural water falls, good lodging services, and people can experience the hospitality of our people in the jungle region,” Linares expressed.

“There will be comfortable and ecological hotels, so close to nature.”

Moyobamba is another city that will receive the volleyball teams. A Spanish-colonial style place that will be the center of expectations and big attractions for the fans in one of the countries where volleyball is as popular as football.

“We have a very big fan base in our country, as you have seen it,” the Peruvian Volleyball Federation President expressed. Rioja will be the other city that is being prepared to host the competition. The XIV Pan American Women’s Volleyball Cup will be played from June 11 to 22.