Eczacıbaşı VitrA İstanbul survived Volero Zürich and although it was outplayed, the Turkish team reached Golden Set and went on the Champions League Final Four. 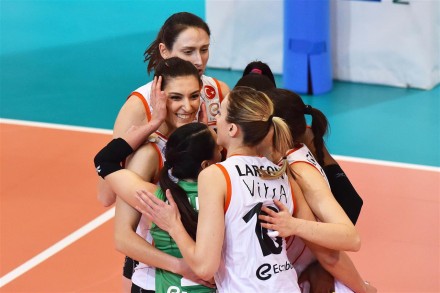 After comfortable victory in the first leg of Playoff 6 by 3-0, roles were switched in the second leg. Volero reached 3-1 in sets and after more than a tough Golden Set, it lost while having 5-1 lead!

The first set was marked by several series of points on both sides.

Eczacıbaşı opened the match with early 1-3 lead, but Rabadzhieva wanted to redeem for the poor performance in the first leg. She started to score and block.

Volero made a 5-0 run and led by 8-4. Swiss team scored all of those 5 points on Kupriianova’s serve.

Volero continued in the same rhythm. Ninković and Rabadzhieva created another run – 3-0 (11-5).

Next several points didn’t bring lead more than one point to any rival until two consecutive blocks by the home team (Ninković and Rabadzhieva) – 20-18.

The start of the second set was not very interesting since both teams won points only on opponents’ errors, especially on those from serves.

Larson, who didn’t show anything of her arsenal of weapons, finally started to win points for Eczacıbaşı. De la Cruz joined the American and with 5 poits in a row, Turkish representative gained serious advantage (4-9).

Home team’s setter Thompson made the crowd ecstatic when she did a feint and scored the second ball (21-17).

Eczacıbaşı’s coach Caprara had to call time-out. And it worked. Larson made two kills while Sánchez was blocked – 21-21.

Eczacıbaşı even took one-point initiative and maintained it all the way by materializing the 2nd set ball. De la Cruz deserved to finish it – 24-26.

Volero players knew that their destiny depends on the third set. They started it in a great pace (7-4). But, on the other side was one of the main favorites for European title. Eczacıbaşı scored 4 in a row (7-8).

On 8-8 result, Rabadzhieva had an ace and successful lob spike while Ninković blocked opponents twice. If we add Mamamdova’s attack, it was 13-8 for Volero.

Eczacıbaşı was breathing down Volero’s neck and managed to equalize at 20-20. Afterwards, it was point for point play in which the home team had initiative.

Fürst saved set ball by blocking Sánchez at 26-25, but Neslihan’s poor spike gave Volero another chance (27-26). Rabadzhieva found an amazing angle to spike – 29-27 and Volero had 2-1 lead in sets.

Golden set had to decide the participant of the Final Four in Szczecin and it started with an ace from Thompson. Poljak’s deconcentration while spiking (touched the net) an Mammadova’s block gave 3-0 lead for Volero.

Rabadzhieva rewarded an effort of her teammates in defense and realized counter attack for 5-1! Caprara called time-out. Things weren’t looking good for Eczacıbaşı.

De la Cruz reduced the gap on 5-4 which was 3-0 run from Turkish team. The significance of the Golden Set made players of either team nervous and it reflected on service errors, but Volero maintained the distance – 8-6.

It was 8 points a piece after Larson’s powerful spike, so Volero’s coach Baltić was forced to ask for time-out.

Probably the crucial point was at Eczacıbaşı’s 8-9 lead when De la Cruz saved one tough ball and than scored it. Came the block on Mammadova (8-11). The winner was about to be promoted, but Volero tied at 12-12.

IS HE SETTER OR LIBERO? Two incredible saves from Drzyzga (VIDEO)