Before the 2015 FIVB World League clash between Iran and USA, on Friday, Iranian Volleyball Federation proudly announced its decision to finally allow women to watch the games. But... 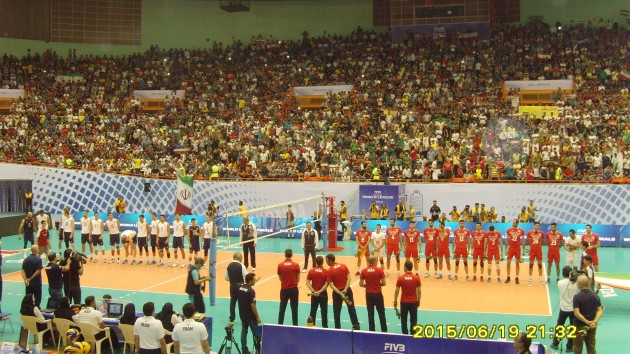 When females tried to enter the hall to see Iran – USA match, they were stopped by the organizers, according to some media. As most of them were journalists, that information was soon revealed and published which caused numerous protests on social networks.

As some media wrote, Islamic radicals branded female fans as “sluts” and “prostitutes” and allegedly distributed the vulgar posters. That is the main reason why the decision of Iranian Volleyball Federation had to be dismissed.

Islamic radicals didn’t hide displeasure with the decision of volleyball authorities from the start. They protested in the streets against breaking tradition that prohibited women to participate in sports events.

Even Iranian government showed willingness and assured the FIVB (the World Volleyball Federation) it will make concessions on this matter, but the situation is different in the reality.

The most famous case of forbidding the women to enter sport events in Iran was an arrest of Ghoncheh Ghavami in 2014 when she wanted to watch the World League game between Iran and Italy.

Oh my God!!! I’m very religious and I love Islam but I never let myself call some one prostitute for attending stadium. Its also a crime in Islam to insult someone like this!!!
I believe this problem is not related to Islam at all. Because our government allowed women to attend the stadium. If it was indecent in our religion , our government wouldn’t allow that.
I think problem is related to some people’s culture. Attending stadium is not common for women in Iran and some people can’t accept it!!’
Iran’ s volleyball federation must convince such people and it takes time. It can’t happen in a day or two.

PER M: Peerless champion of Peru