The only way for Russia to start winning at the 2015 FIVB World Cup was to forget all the bad things that hapened in the World League. And it did it - 3-0 (29-27, 25-16, 25-15)! Venezuela presented itself as a tough opponent, but only in the opening set in which it failed to keep a four-point lead. 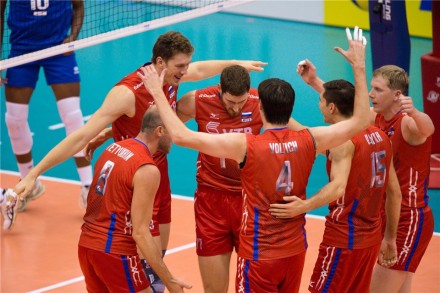 Venezuela missed a huge chance to shock Russia in the first set. Thanks to rhapsodic González, it had 12-8 lead. The same player then started to make errors, while on the other side, Ilinykh woke up the Russians. They approached to „-2“ (14-12).

The key moment was a successful challenge by Russia at 20-19 for the South Americans after Mikhailov’s spike. Russia made 3-0 run afterwards, but Venezuela had the first set ball (25-24). And the second. And the third… Russia converted its first with Muserskiy’s quick attack (29-27).

When you are not in the world’s top, and to be honest Venezuela isn’t, it’s difficult to recover when you lose nearly obtained set. Some other team would manage to reset and play like nothing happened.

As for Russia, winning the first set gave them wings and it flew very high, leaving its opponent to wriggle on the court. Mikhailov’s serving and spiking bombs as well as Muserskiy’s quick attacks were unstoppable (25-16).

Nothing has changed in the third set. Muserskiy’s block on Pinerua for 4-1 lead of Russia was the beginning of Venezuela’s fall. Sivozhelez was the star of this set, sealing the destiny of South American side with several aces (11-3).

Poletaev than took over the job of taking Russia to the first win at the tournament (25-15).

The best scorers in Russia and in the game as well were Dmitriy Ilinykh and Maksim Mikhailov with 12 points each. In Venezuela, Fernando González and Kervin Pinerua had nine.

WC M: Is anybody able to see this spike by Zaytsev? (VIDEO)