LIVE from Rotterdam: De Kruijf – „It looked like Russian players had wings…“

Women’s volleyball has returned to the Netherlands in a big way. From the 9th place at the 2013 European Championship to 2nd place and silver medal on this year’s! The Dutch middle blocker Robin de Kruijf is aware of the magnitude of this success, not regretting too much for the defeat in the finals against Russia, in Rotterdam. 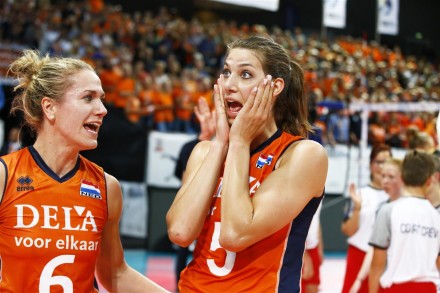 „We were sure that they will play (in finals) like they played during an entire tournament. My compliments to Russia. They played incredible. It looks like they played the best game in the tournament. What I know is that we really fought hard, we showed what we could do. In the third set we played our game and it’s a pity that despite that, we lost that one. But, I’m still so proud and so happy what we did. Of course, I wish that we could show more in front of 11,000 people here but still, it’s a medal, it’s an honor,“ De Kruijf stated for WorldofVolley reporter on the scene.

Was there any way to beat Russia?

„As I said, in the third set we played more of our game but we had to play like that from the first set, to put more pressure on Russia. I think we gave them to much space to play their game. It looked like they had wings, like they are taller than usual,“ the Dutch middle underlined.

Next are qualifications for the 2016 Summer Olympic Games…

„That’s for sure our goal and I think that one of the most important things from this tournament was to see where we stand in Europe and to see that we can compete with every team in Europe. If we play in the qualification tournament like this, we will qualify,“ De Kruijf is certain in the quality of her national team.

ECH M: Slovak national team with only one opposite (ROSTER)