LIVE from Sofia: Toniutti – „We saw on Bulgarian faces that they could lose“

Benjamin Toniutti, what a setter! He makes his teammates even better than they are, practically drawing attacks for them. He has a large share in French win over Bulgaria in semis of Eurovolley 2015. Here’s what he said after the match... 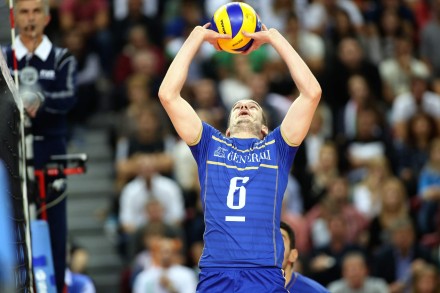 „To play against Bulgarian team and the fans was very difficult. We didn’t play so good, but later we tried to play better and we returned to the game. After that, when it was close, we saw on the faces of Bulgarian players that they think ’maybe we can lose’. So, we continued to push and finally it was an incredible victory because it’s amazing to come back after 0-2 and to do it in this gym, in Sofia, in front of 13,000 people,“ Toniutti stated.

Have you ever played in front of the fans like this?

„I tnink I haven’t. I have seen some atmospheres like this, but not a pressure like this. In Poland, it was not that agressive like here. But, it’s good when you win,“ the setter added.

What do you think about the final match against the surprise of Eurovolley, Slovenia?

„Now, we can’t say they are a surprise because they are having an amazing tournament. We played a friendly game before European Championship against them and we lost. So, I knew even before this tournament that Slovenia was a good team with players playing in strong teams. We will have to prepare to play with a lot of agressivity,“ Toniutti concluded.

LIVE from Sofia: Nikolov – „I should have scored those two balls in the fifth set…“