Romanian side will face serious penalties… 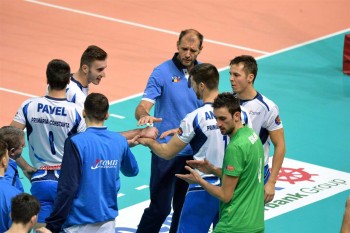 It is official. CEV announced that Tomis Constanta have withdrawn from the Champions League, two rounds before the end of the group stage! Romanian team had to made this call, as the club is passing through a major financial crisis.

Tomis Constanta will face serious penalties. They will not be able to play any of the CEV competitions in the next three years, while they will also face financial sanctions.

This is the full announcement of CEV:

“The Volleyball Federation of Romania has informed the CEV that the club of Tomis CONSTANTA has withdrawn, with immediate effect, from the 2016 CEV DenizBank Volleyball Champions League – Men. As a result, the two remaining matches that were scheduled to be played by Romania’s champions in Pool G are now considered as won by 3:0 (25-0, 25-0, 25-0) by the opposition teams (Asseco Resovia RZESZOW and Volley ASSE-LENNIK). These results will count to determine the final standings in the group together with all other matches previously contested and still to be played in that same pool.

In accordance with the 2016 Official Regulations, a withdrawal at this stage entails also a number of organizational actions and financial sanctions and the club of Tomis CONSTANTA has lost the right to participate in the first European Cup competition that it qualifies for over the next three-year period.”

TUR M: Tupcii and Ćirović will continue career in Turkey

Club will stop to exist and there will be fines… And the biggest shame will be for CEV and especially for VOLLEYBALL!!! But it seems this is our reality

One is certain…we will see no money…
Nobody to protect us…
It’s a shame our sport doesn’t give same legal support to the players, as it is in football and basketball.

All this because team doesn’t have to deposite money before the start of the championship. This is volleyball reality… Sorry for players who stayed there the whole season and didn’t get their money. I wonder if it is the same situation with their managers?

Croatia find out the names of the...