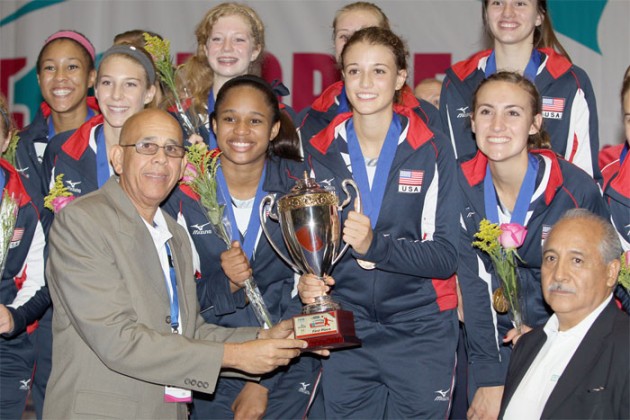 Simone Lee totalized 18 points for the American team while Carli Snyder, who became the MVP registered 17. Christian Jones was the champion team best scorer with 10 points.

On the Dominican side Brayelin Martínez, who claimed honors as best scorer finished with 24 points, while Gaila Ceneida González concluded with 12 and Natalia Martínez, team’s captain ended with 11.

Both teams qualified to the FIVB Womens U18 World Championship that will be played next year in Thailand.

“Dominican Republic played very well is a very good team, well coached and fought really hard”, said Team USA coach Reed Sunahara. “I’m very proud of my team. We never gave up. We lost the first set but we fought. Our defense played better that was the key.”

Sunahara won his second tournament in one month after winning the XI Women’s Pan American Cup in Juarez, Mexico, with the American B Team. Now he won the gold medal at the Continental Championship with the U18 Unit that also clinched a berth in the FIVB World Championship that will be played in Thailand.

Dominican Republic coach, Ariel Sainz, said that despite the loss will work hard with his team in preparation to the World Chapionship. “We’ll keep on working to improve all the difficulties we experienced here. The third set was very important. We were so close. USA did a great job and didn’t make mistakes”, he remarked.

Gold winner according to your votes