USA won the quarterfinal match against host Nicaragua by 3-0 (25-10, 25-7, 25-7) at the NORCECA Women’s U-20 Continental Championship and will play Dominican Republic in one of the semifinals on Saturday. 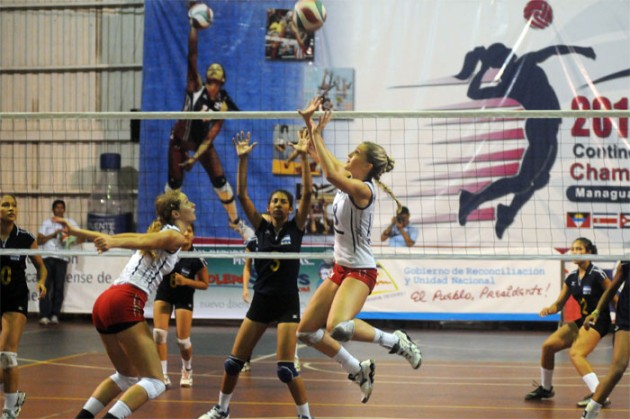 USA had no resistance from Nicaragua and used all their players during the course of the match. USA was superior in the blocking category by 10-0 Kadie Rolfzen was the best scorer with 10 points; Merete Lutz added 8 points and Haleigh Washington contributed with 7.

Kelsey Humphreys USA’s captain declarations “we were cheering all the girls that don’t get a chance to play as often, we tried to keep it positive and be less anxious for tomorrow’s semifinal”.

“I believe we lacked courage and we tried to do our best” said disappointed Nicaragua’s Captain Florelisa Smith.

“Congratulations to Nicaragua because they’ve hosted a wonderful tournament” began Coach Rodney Wilde, as for tomorrow’s match he said “it’s going to be a well contested one, Dominican Republic is a very solid team. They have Brayelin Martinez who has a lot of work load with all the points she has scored and we have to find the way to maybe slow her down.”

Claudia Noguera Nicaragua’s Coach made emphasis that their goal was to be in this round “the girls pressured themselves because they were up against USA that’s a high leveled team, which there not used to play.”