Latvia is very close to finish second in the group after the home guys beat Spain for the second time in one week having done so already some days ago in Szeged. 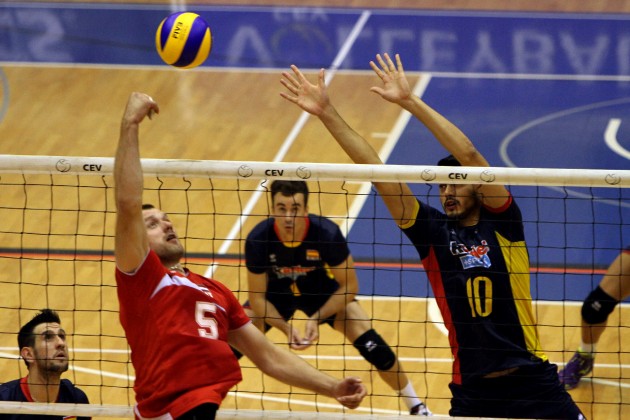 Latvia beat Spain 3:1 (21-25, 25-23, 28-26, and 25-23) as the hosts were accompanied from the stands by their fans with flags, drums and choirs. There was even a special orchestra that did contribute a special atmosphere at Zemgales Olympic Centre in Jelgava. Hermans Egleskalns paced the home side with 25 points while Aivars Petrusevics totaled 15; Iban Perez registered 23 for Spain.

The President of the Latvian Volleyball Federation, Almers Ludviks, who was in attendance, was evidently pleased with the result. “This was the most important game of the century for our team and I am happy that after the bronze medal claimed in London by Martins Plavins and Janis Smedins, Volleyball is getting so popular here in Latvia”.

“It is just fantastic to play in a full house, something rather unusual for Volleyball in Latvia” said player Ansis Medenis. “The match was very tight but I think finally it was a pleasure to watch for our fans. We played well and aggressive in the end of the sets and we showed our confidence there. Spain played good in defense but we did it too”.

In combination with today’s matches, Latvia’s Head of State Andris Berzins, the President of the Latvian Volleyball Federation Almers Ludviks and member of the European Parliament Inese Vaidere, together with members of the local municipality, honored the 50th birthday of Raimonds Vilde, the head coach of Latvia’s national team, as well as the 80th and 60th birthday of other Volleyball legends, namely Zigismunds Grigolunovics – who mentored for a long time Latvia women’s national team – and Jurijs Deveikus, the former head coach of the men’s national team.

Latvia will conclude their European campaign on Sunday by playing France.