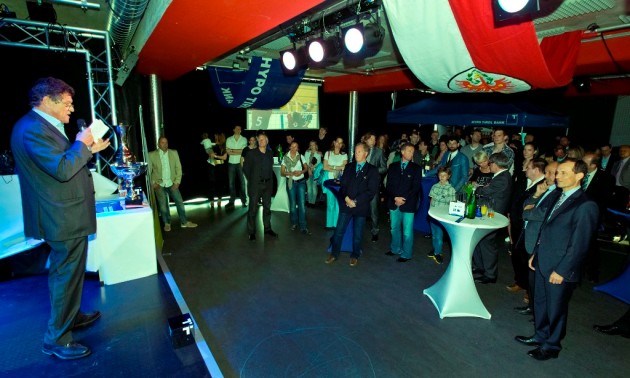 In Pool A the Tyroleans will face the reigning champions of Zenit KAZAN (Russia), plus Knack ROESELARE (BEL) and Germany’s VfB FRIEDRICHSHAFEN.

At the press conference held in Innsbruck on Tuesday, the club presented its ambitious goals for this season as well as the trophies from last year’s campaigns in the national league and in the Middle European League to the media and its various partners.

This year’s goal for the 2013 CEV Volleyball Champions League will be to make it out of Pool play into the Playoffs. The very first match scheduled for October 24 at home against the neighbors of VfB FRIEDRICHSHAFEN will immediately be a very decisive one looking at the four teams assigned to that Pool.

Zenit KAZAN is the clear favorite for taking the first place but behind the Russians there are 3 teams that will be fighting for the second spot of the standings according to Hannes Kronthaler, General Manager of the club: “We are looking forward to the start of this year’s Champions League. I think we have three very attractive opponents whereby we will have a full house and a great atmosphere for all of our home games. With KAZAN we have the defending champion in our Pool for the first time in our Champions League history, which will draw big attention from the public. VfB FRIEDRICHSHAFEN is a very well known club in our region and the fact that an Austrian opposite is playing for that side adds a little extra flavor. And also with ROESELARE our club has some history after crossing their ways in the 2010/2011 season. Overall I think we will have to focus on our opponents from Germany and Belgium, as Zenit is most probably out of our range. But with the other opponents I am hoping that there will be a close fight for second place and therefore the first match at home will already be of great importance”.

Head coach Stefan Chrtiansky added: “We have big goals for this season and want to fight for the position to make it to the Playoffs. We know our direct opponents for this position will be FRIEDRICHSHAFEN and ROESELARE. I think especially in Innsbruck we will be able to come up with some good fights and put up a good performance for our opponents. Our team is still young and without big experience in the Champions League but I see our chances much bigger than last year where we had incredibly strong opponents. Unfortunately we got slowed down just recently with the injury of our setter Claudio Carletti, who will have to have surgery on his right knee and is expected to be out for at least 4 months. We are working hard to find a possible replacement”.

With the opposite spikers Ronald Jimenez (COL) and David Szabo (HUN), the setter Tamas Kaszap (HUN) and an Austrian shooting star on the outside hitter position, Lorenz Koraimann, the team around head coach Stefan Chrtiansky has 4 new players who have never played in the CEV Volleyball Champions League so far, but are looking forward to their first matches. Not with the club anymore in comparison to last year are Arvydas Miseikis, Daniel Koncal, Rodrigo Ceola and Stefan Chrtiansky jr. who just recently moved to Italy’s TRENTINO Diatec.

Also eager to start is the team captain Daniel Gavan, who is the only player who shared with the club all previous – seven in total – appearances in the competition: “This year we have a better Pool than last year in terms of our chances to make it to the next round. Defending champion KAZAN is definitely out of our reach, but we can compete on equal terms with the other teams. Although they both have a more experienced group than we do, we have to use all chances that we get and play with glowing hearts to come out with a victory in the end. I know that all teams in our Pool are planning on winning against us and we have to be prepared for that. We will do our best and fight till the last ball touches the floor”.

ITA W: Double test with Baku and Chieri for Piacenza

WoV in Manila: Volero without problems at...