Knack ROESELARE scored on Wednesday its second home win in the prelims of the 2013 CEV Volleyball Champions League this time by edging Germany’s VfB FRIEDRICHSHAFEN with the score of 3:1. Read latest volleyball news on Worldofvolley.com. 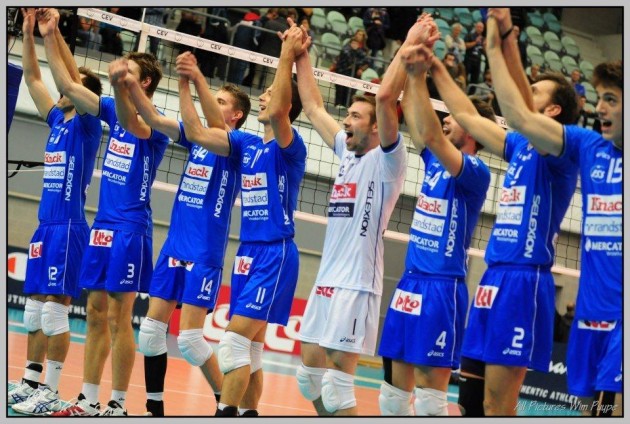 The guests started their campaign with three service errors with ROESELARE going up 8:6 by the first mandatory stop of the opening set. Puerto Rican Jose Rivera fought back for the Germans as he surprised the Belgian block with his left-handed attacks and opposite Ventceslav Simeonov also added some more points to make it 14:16 at the second technical time-out. Dirk Westphal fired up the comeback of Knack ROESELARE and an ace by Gertjan Claes drew level at 20 all. After a tie at 23, VfB FRIEDRICHSHAFEN got a set ball but Hendrik Tuerlinckx finished it off at 26-24 for the home side.

With the great contribution of their captain Joao José the guests from Germany went up 4:8 in the second set and with Brazilian Idi behind the serving line they widened the gap to 6:11 and 7:12. It was 10:16 by the second technical time-out and as Van Hirtum replaced Paulides, Knack closed the gap a bit to 13:16. Tomas Rousseaux and Stijn D’Hulst replaced Tervapportti and Tuerlinckx but it was Simeonov that hit the last ball to make it 1:1 in sets (22-25).

The third set was extremely close in the early phases but Tuerlinckx spiked for the 8:6 and with Westphal on fire Knack could gradually get control of the operations (16:12) while Simeonov was replaced by Thomas Zass as VfB opposite. Knack did not lose composure (22:16) and young star Rousseaux could score the last point for the joy of the home audience (25-20).

Starting with their best setter Juraj Zatko and Zass, the guests opened with a 2:4 run in set 4 but once again Tuerlinckx – best scorer in the end with 23 points well supported by Westphal with 16 – could pace Knack (14:10 and 16:12) and the splendid run of the home side continued up to the 25-23 that sealed a splendid 3:1 win whereby the fans literally erupted in joy.

“I want to congratulate my young players for their enthusiasm and the hard work they sustained to claim this match. I also want to praise our second lines because their help was fundamental to win this game. It was close but I think we deserved this victory” said home coach Emile Rousseaux.