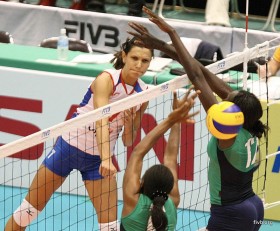 Brizitka Molnar was playing for the Turkish Galatasaray, but only in Champions League since they had a rule that only three foreign players could play in the National League at a time.

‘’Last season I was not playing that much and now I am very motivated in order to show my abilities in National Championship of Poland. I can’t wait to start playing in jersey of Atom Trefol Sopot and even more in Champion League.’’, said Brizitka Molnar.