Asseco Resovia will enter the Playoffs as the first placed team of Polish Championship! Red and whites have won a thriller derby against PGE Skra Belchatow and clinched the pole-position! The second set lasted for 46 minutes! 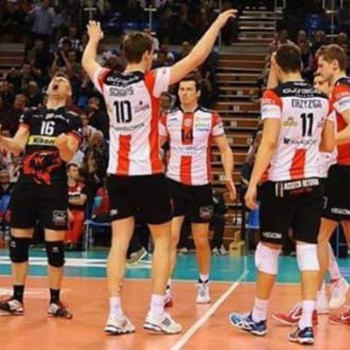 We could write a separate report only for the second set. Because it was simply unbelievable! The second set of the Resovia – Skra derby lasted 46 minutes! 46!!! Home team gained the opening lead thanks to some brilliant spikes of Marko Ivović – 8-3. Resovia kept the distance all the way until 23:20. But then – 4 consecutive points for Skra! Away team had the first set ball at 24:23!

It was time for the third set… and for another thriller! Resovia had the right momentum after winning the previous battle and used it to escape to 20:14. It seemed that the home team will just perform a routine finishing, however Skra managed to return to this match. With a 7:1 run, away team tied the score at 21:21! Nicolas Marechal touched the top of the net in the next play and gave a new lead for Resovia, Karol Klos equalised on 22:22… But, Skra has never managed to perform a total turnaround. Piotr Nowakowski has put Resovia in front again – 23:22, while then Dawid Dryja blocked Andzej Wrona for 24:22! Finally, Nikolay Penchev converted the second set ball into point – 25:23. Resovia was in the lead 2-1 in sets!

Home team was just unstoppable after that. Asseco Resovia was up ahead 8:5 at the first TTO in the fourth set, while at the second TTO it was already 16:9. There was no coming back for Skra this time. Nikolay Penchev made the final blow and ended the set at 25:15. 3-1 for Resovia!