Asseco Resovia Rzeszów returned the championship title home! After beating Lotos Trefl Gdańsk in the third game of playoff final series in Plus League, Resovia won its seventh title, the first after the season 2012/2013. Trefl was better in the first set, but the packed stands in "Podpromie" hall wanted the trophy and their favorite team made an turnaround – 3-1 (19-25, 25-19, 27-25, 25-18). 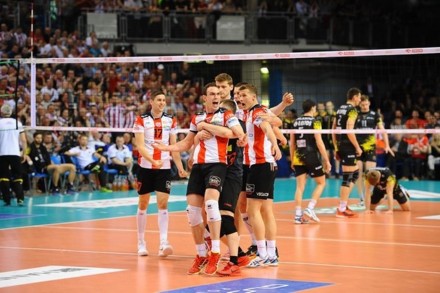 Trefl established initiative from the beginning of the first set and with two consecutive blocks from Schwarz it gained 2-4 lead. After the first technical time-out (6-8), the guests created 0-3 run (6-11). Troy was the key figure in that period for Trefl. Resovia’s coach Kowal changed three players from the starting line-up – Penchev, Drzyzga and Schops. Soon, he returned Penchev and it paid off since the home team approached to 15-17. Trefl rejected opponents’ series and made its own – 0-3 for 15-20. Every counter attack from Trefl went on Gawryszewski and he was flawless. Schwarz’s powerful counter for 17-23 marked the end of Resovia’s effort. The first set finished with 19-25.

Resovia didn’t allow the same scenario at the start of the second set. It was perfect in materializing counter attacks over Penchev but spoiled every minimal advantage with service errors (3 in a short time). So, it was equal until 6-6 when Resovia made 3-0 run with 2 points from Penchev and Troy’s error (9-6). The home team maintained the three-point gap until 12-9. Troy ’woke up’ while Gawryszewski’s block gave Trefl 12-12.  Resovia’s coach Kowal decided to take a risk with Ivovic who is recovering from an injury. The receiver raised the packed stands on their feet after the precise spike for 17-15. Soon, Ivovic scored an ace for 19-16 and Trefl’s boat has begun to sink. Konarski nailed it for 20-16 and later for 23-18. Finally, it was 25-19.

Kowal started the third set with Tichacek on the position of a setter instead of Drzyzga and his team was in the mood. With two points in a row from Ivovic it was 6-4. Trefl crowned its great defense with 3-0 run (Troy’s spike, Gawryszewski’s block and Grzyb’s ace) for 6-7. Since then, it was point for point play with Schwarz’s one man show on Trefl’s side and several service errors on both sides. Since 13-13, Konarski scored three consecutive points for Resovia which went on a technical time-out with 16-14 lead. The same player gave Resovia huge three-point advantage at 20-17 after counter attack. It seemed to be the turning point of the set, but Trefl recovered and even gained the lead – 20-22 after 0-5 run and two successful video checks from the coach Anastasi. Nowakowski’s quick attack and block have shaken confused players of Resovia – 24-24. It was not all since Troy’s spike went wide. It looked like another one landed off the field, but Anastasi asked for video check and won it again – 25-25! Believe it or not, he asked for another one in the next point, but lost (26-25). Penchev turned counter into 27-25 and 2-1 in sets.

Playful Konarski led Resovia at the very beginning of the fourth set when his team created an early gap – 5-2. Trefl approached to 7-5, but the home team had several attacking options that worked perfectly – Konarski, Ivovic and Penchev along with Nowakowski (9-5). After Penchev’s ace for 12-7, the audience could start preparing for the title celebration. Nowakowski gave six points of advantage to his team after blocking – 15-9. Anastasi kept asking for video checks, but unlike the third set, he failed twice in a row. Resovia superbly ran towards the championship trophy – 18-11. The final result of the 4th set was 25-18.