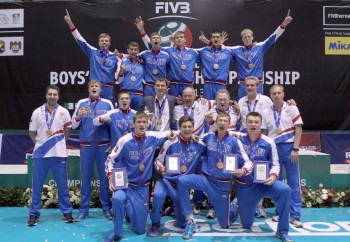 After two close battles in the first two sets, then it was a solo show of Russia with a splendid performance in all facets of the game.

China, meanwhile, was reduced only to a shadow of the team that captivated the fans with their fast combinations and spotless defense.

Victor Poletaev scored 25 points to lead the new champions followed by Dmitry Volkov with 14 and setter Pavel Pankov with 13, including seven aces.

Tang Chuanhang was the best scorer of China with 18 points while Xia Runtao had 15 in the losing effort.

It is the third gold medal for Russia in the history of the age-group biennial competition, having won also in 1999 in Riyad, Saudi Arabia and in 2005 in Aljiers and Oran, Algeria. They also claimed silver medals as the former Soviet Union in 1989 and 1991 and a bronze in 2001.

To see more photos, check out the gallery below.

To read about this competition click on Youth World Championship 2013 M.

COLOUR YOUR SUMMER WITH WoV COLOURS!