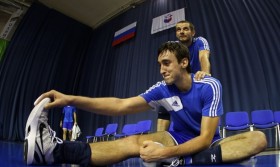 Since the season 2011/12 he was playing in the first team from Kazan, and same year he became a Russian champion and won Russian Super Cup with Zenit. In the next season Matychenko helped Zenit to win the bronze medal in the national championship.

As a member of Zenit, the 24-year-old opposite played 18 matches.

Vitaly won the bronze medal at European Championship in 2008 with the Youth team of Russia.

Matychenko’s new club, Kristall, will participate in the “B” second league of Russia in the season 2013/2014.

See the WoV Community profile of Vitaly Matychenko and Kristall.