After edging Crvena Zvezda BEOGRAD on Tuesday to claim the leadership in Pool B of the 2014 CEV DenizBank Volleyball Champions League – Women, Dinamo MOSCOW is already looking forward to the return game coming up next week in Russia. 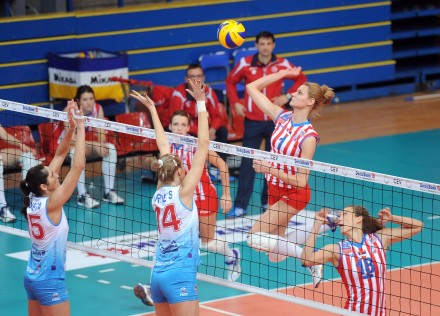 “After a very busy schedule in October things have been completely different this month where we almost had no matches at all” says Dinamo head coach Svetlana Ilić. “On the other hand our players could get some rest and some could also fully recover from their injuries. Tatyana Kosheleva had some problems with her spine while Nataliya Obmochaeva needed to treat some minor injuries; this is why they did not go with the national team to Japan for the Grand Champions Cup. We already had a couple of matches in the Russian Superleague after the break and also played Crvena Zvezda in Serbia. We feel ready for the remake of this game, this time at home.”

“The result of the next matches is extremely important for the final standing of the group especially after Igtisadchi BAKU lost to PIACENZA. We need to be fully concentrated” says Kosheleva, the team captain of Dinamo MOSCOW for the current season.