After turning into the major sensation of this year’s CEV DenizBank Volleyball Champions League, the volleyball club Omichka OMSK REGION has launched a project to invite fans submit drawings, photos, videos, poems, songs and other written texts, in one word anything which expresses and embodies their support for the Siberian “Cats”. All of these works will be published on the official website of Omichka. 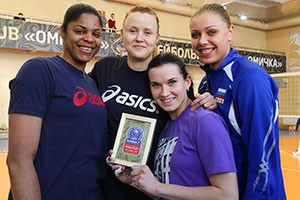 The players of Omichka will then select three entries whose authors will be awarded special prizes, including souvenirs and giveaways with the club’s logo. The winner of this contest will also receive the original CL badge that the players have been wearing throughout this season. This will be autographed by all of the players included on the roster of Omichka. A special exhibition will also be organized at the V. Blinov Athletic and Sports Complex in order to display the various items produced by the fans.

The contest will run up to the end of the regular season in the Russian Superleague, i.e. April 20. The winners will be awarded during the first Playoff home game played by Omichka.

ITA M: Round 19 in numbers – Vujević dominates despite turning 40!