RUS M: Ovchinnikov: the main thing is win a trip in London

On the game on the qualifying tournament in Japan, the leadership qualities of Evgeniya Estes and the situation with injured players in an interview with the head coach of the women's national team of Russia Sergey Ovchinnikov. 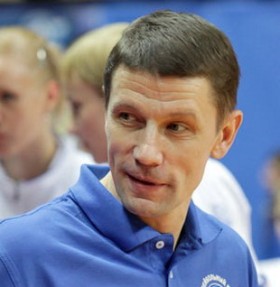 – The Russian national team played very good at the Olympic qualifying tournament in Japan. What are your impressions after returning to Moscow?

“Most importantly is we have achieved result and win an Olympic ticket to London. This is the main result of the tournament in Japan”.

– Missing Cuban national team at the Olympics is the main surprise for you?

“In general, hard to say what prevented Cuba to achieve positive results. This collective acts in such structure long enough period.

For example, I saw a game of  Cuban with a team of Japan. I can say that in this fight, Cuba has given the game itself, at some point, having made an enormous amount of errors.As a result, lost in the fifth set with a score of 15:17, twice miscalculated on the submission. In general, Cuba put itself in a difficult position. I note that, despite the 3-0 result in our confrontation with the Cuban, is not easy. The confrontation turned very serious”.

– At the Russian team is very solid structure. What are your players have surpassed rivals?

“Team was played in higher level. From first to last ball acted as a unit. To any person there are no claims.  All have fulfilled under the program.”

– We can compare the two qualifying tournaments – Turkish and Japanese?

“This competition is not comparable in any case, because different people have played. If Turkey was one of the participants, in Japan is completely different. I think that the parallels drawn between these tournaments, it makes no sense.”

– Tatiana Kosheleva went with the team to Japan, but the result is returned to continue treatment. Lesya Makhno during the tournament continued to recover from injury. As the situation with the injuries affected the readiness of the team?

“All matches of team Russia played without replacements, almost everything.”

– Already very many words have been told about Evgeniya Estes, her performance in Japan. Indeed, our experienced volleyball player has appeared the real leader?

“Zhenya has brought confidence, she simply a good fellow. I want to note once again that all the players showed a good level of play. We were a team, and Evgeniya was an important part of this team. She was holding a reception, looked great on the block and defense. In general, all components of Evgeniya played perfectly well, has brought enormous benefits.”

– You allocated such role of Evgeniya Estes when invited her to gathering?

“She was invited as one of the best players in the Russian championship. She once again proved it.”

– We can say now with certainty that Estes would go to the sixth Olympics?

“She is configured, she wants to. Make every effort to work. I think that everything will be fine.”

– In what state of the Russian national team came back from Japan?

“Now, of course, there is a sense of utter desolation, and psychological and physical. Now the girls have the opportunity to rest, and on June 10, we begin to work in Anapa. Without a pause to work further is impossible. It is very difficult club season, then the charges and two tournaments. Accumulated fatigue.”

– Who will come to Anapa on 10th from those whom we have not seen in Japan?

– In what the state of Tatiana Kosheleva now?

“All depends on the recovery process. Now she will fly to Germany for rehabilitation. Again, I shall repeat, everything will depend on the recovery. Some additional comments simply unnecessary at this time. We must await the first results.”

“Doors of national team for her are opened.”

– What is the final will consist of pre-Olympic training period?

“From 10 to June 29, we train in Anapa, then go to Yekaterinburg where will be the next Cup Yeltsin. Then there will be another tournament in Italy, and the last few days before flying to London will hold in Moscow. I think that we will play several friendly matches against good opponents.”

CL W: Obmochaeva – “Do not underestimate...