Spectacular derby! Dinamo Moscow and Zenit played a fantastic game which was eventually finished with a 3-1 win of Kazan team. Therefore, the reigning champions are now only one point behind the first placed Belogorie… 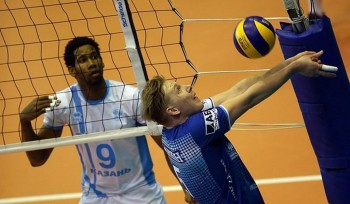 If you have a possibility to watch a replay of this game somewhere, you just have to do it. It was a top volleyball spectacle. Two amazing teams, moves which defines the law of physics, there was even some blood on the court, while one serve ended in a trash can…

But let us focus on the third set, where most of the amazing things happened. Two teams were all tied at 1-1 in sets, but Zenit had a better opening and eventually went ahead at 21:18. But, Dinamo Moscow took the next point, and then Maxwell Holt went on a service line.

He scored two straight aces! In the second one the ball bounced off the hands of Alexey Spiridonov and ended up in a trash can behind the bench of Zenit! But, Spiridonov did not hit only the ball. He accidentally hit Alexey Verbov and cut him just above the eye. The starting libero of Kazan side had to go on bench. It was 21:21 on the scoreboard.

In the next play, Zenit scored a point through the middle for 22:21, and it was Wilfredo Leon’s turn to serve… He scored an ace! 23:21! Away team used the second set ball and finished the third set. The crucial set.

Because in the fourth set Dinamo Moscow was without any chance against fired up crew from Kazan. Leon continued with powerful spikes, Merouf had several amazing sets… Zenit won the game and approached to the first placed Belogorie on just one point behing!

This will be an epic race for the pole position.

TOO FAST: Warm up of Jenia Grebennikov...