Although, according to current regulations, the Russian national team should be relegated from Group 1 of the World League it might not happen! 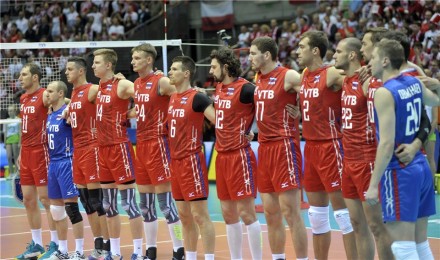 Russia hasn’t officially left elite division of the WL and as „R-Sport“ writes, the International Volleyball Federation (FIVB) is interested to allow this national team to continue playing in Group 1.

„The format of the World League is changing every year and the format for the next year hasn’t been determined yet. It’s unclear how many teams will participate in the tournament. I think it’s likely that the next season there will be different regulations in the World League. FIVB is interested and we are interested as well (that Russia should participate in the World League’s elite division). It’s necessary to wait for the announcement of the new regulations which will take place in autumn,“ – said the President of the Russian VF, Stanislav Shevchenko.

Recall, the Russians lost 11 out of 12 games this season in WL and became the worst among eight teams in Group 1.

Australia survived in elite division thanks to last round’s win over Serbia, yesterday.

If Russia stays in Group 1 it won’t be such a surprise if we know that, above all, the World League is a commercial competition.

What a bunch of cr*p!! All the teams start to play for some goal and at the end everything is worthless because some big shot from the top say that they will change regulation. Very unfair!!!

Welcome to the world of FIVB. Of course, this would not be a surprise. As it says in the article, World League is a ‘commercial tournament’ and the regulations will always be bent so that it benefits to the commercial interests in first line.
Just feel bad for the teams who are playing their socks off and in the end success/failure will be meaningless…..

Maybe they should organise some kind of play-out between the 2 lowest ranked teams of every pool that wil prove wich team is better and has the right to stay in this group. This looks fair enough for me.

Firstly World Cup, no Brazil in the tournament = no rank points for playing teams. Now Russia will stay in the first division of World League. What the hell FIVB?