Russia did not have an easy job against Egypt, but they had a player who was able to overcome all difficulties. 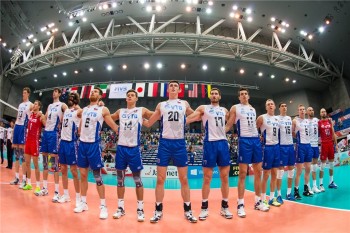 At the end, Russia defeated Egypt in straight sets, but it could have ended quite differently. African team showed from the beginning that they would be a worthy opponent in this match. Egypt had the starting lead of 8:4 in the first set, while two sides were all tied at 17:17… Then, Russia scored 4 in a row and escaped to 21:17 which was enough for closing the set 1 – 25:20.

Egypt missed their real chance in the second period. They were in front throughout the whole set – 15:11, 17:14, 21:18, 24:22… Russian head coach Vladimir Alekno realized during the set that his team is in real danger of losing it, so he decided to put Dmitriy Muserskiy into the game, despite the main plan was to give him a day off.

And, it was Dmitriy who changed the outcome of the second set. The captain of Russia scored for 24:23, then he made a fantastic save after which Sivozhelez tied the score at 24:24! Then, Muserskiy made and ace for 25:24, while finally, after another great serve, the captain himself finished the set with strong spike – 26:24, 2-0 for Russia.

After that everything was a lot easier for Zbornaya. They stormed through set 3 and seized a straight sets win.