Legendary Russian volleyball player Sergey Tetyukhin might be at the helm of Russia Olympic Team at the opening ceremony of the Olympic Games 2016! 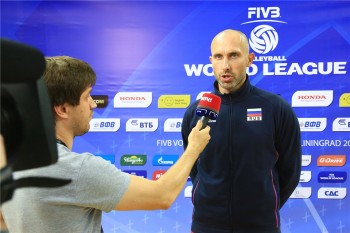 According to the Russian media, Tetyukhin may be named flag-bearer for Russia in Rio Olympics.

“It is not yet confirmed. To be quite honest, I found out about that possibility in the media. Still, It would be a great honor and I would be pleased to bear the flag of my country at the Olympic Games. I would bear the flag with dignity,” said Tetyukhin for sport-express.ru.

Recall that Russia will be defending volleyball gold in Rio, as they won the Olympic tournament 4 years ago in London. Sergey Tetyukhin was part of that team which became the Olympic champions.

Fould out – found out

#IAMINBERLIN: How hard is this? Sideways set...