RUS W: Russia VF harsh on Marichev – “He could not cope with the Olympics”

Although the official decision has not yet been made, it is quite clear that Yuri Marichev will not remain head coach of Russia women's national team. 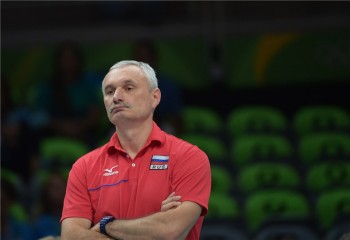 The president of the Russian Volleyball Federation Stanislav Shevchenko gave a large interview for Sport Express in which he revealed some details about the Olympic games 2016.

Shevchenko stated that the public has the full right to question some decisions of the coaching staff of the women’s national team.

“Our girls have won the last two European Championships. We have played with many strong teams, but none of them could beat us. Actually, we played with Serbia just before the Olympic tournament and won the match by 3-1… What happened in the quarterfinals? Let’s start like this. Before each match we are making a game plan together with the coaching staff…”

The journalist was quite shocked when Shevchenko admitted that the Russian Volleyball Federation is involved in making a game plan.

“Yes, but I can only recommend some choices. The final word is always on head coach” continued Shevchenko. “It started before the game against Brazil (last match of the group stage). We have agreed  that it is necessary to begin that game with the strongest team. Imagine my surprise when I saw that we started the match with the second setter. On the next day, the coaching staff decided not to schedule a training. And then, just before the match against Serbia, some players were not doing a warm-up.”

“I was extremely surprised. The match against Serbia showed that at some point of the tournament our women’s team simply ceased to be a team. I agree that the coaching staff should answer some serious questions. In my opinion, the head coach failed to cope with the Olympics. He probably failed to cope with psychological pressure. I talked with Marichev after the tournament, but I did not get any reasonable answer. He said that he probably made a mistake somewhere.”

At the end, when asked if Yuri Marichev will remain head coach of the women’s national team, the president of the Russian Volleyball Federation just answered: